Here at TradeSmith, we’re best known for trailing stop losses. And for a good reason…

Our proprietary smart trailing stop losses — available through our flagship TradeStops software — are a game-changer for individual investors.

Unlike traditional trailing stops, ours can identify the ideal time to buy or sell any investment based on its risk profile. And our research — and the experience of thousands of loyal TradeStops users — shows they can provide a huge advantage you can’t get anywhere else.

Simply using them in place of your usual stops can dramatically improve your long-term returns in the same investments you already own.

This is why we encourage every investor — from rank beginners to experienced pros — to give TradeStops a try. And with risk-free subscriptions starting at just pennies a day, I’m proud to say we’ve made it affordable for just about anyone to do.

But that doesn’t mean TradeSmith is a “one-trick pony.”

Fact is, in the years since we launched TradeStops, we’ve built an entire suite of powerful risk management and investment research tools that extend far beyond trailing stops. And today, I want to give TradeSmith Daily readers a peek at a couple of my favorites.

Together, I consider them a “secret weapon” that has helped me — and my Inside TradeSmith readers — stay on the right side of the market over the past year.

The first is our Market Outlook tool.

This tool gives us a comprehensive overview of the current health of 12 major market indexes, including seven here in the U.S. and the main indexes of Australia, Canada, Hong Kong, Japan, and the United Kingdom.

I’ve included a current snapshot of this tool below. 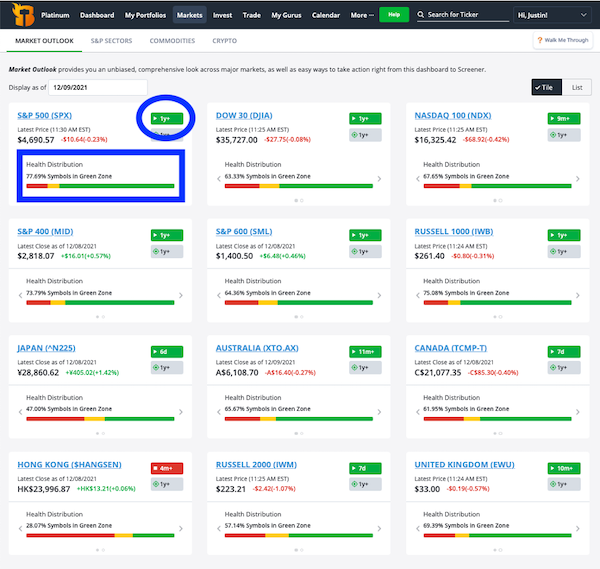 This tool tracks several important indicators for each index. But I want to focus on two of the most critical.

The first is what we call “Health status.” I’ve highlighted the current Health status of the S&P 500 with a blue circle above.

As the name implies, this indicator shows the current health of each index — based on factors including price action, momentum, and volatility — using a simple color-coded system.

“Green” means the index is currently trading in a healthy state (aka the Green Zone). (For folks who choose to invest in index funds, these are also generally considered a “buy” in our system, just like any other stock or asset in the Green Zone.)

“Red” means the index is in an unhealthy state (aka the Red Zone). These are generally considered a “sell” (or “do not buy”) in our system.

Finally, “Yellow” indicates the index has currently pulled back more than halfway toward the Red Zone but is not yet officially in an unhealthy state. These are generally considered a “hold” in our system.

The Health status box also shows how long that index has been in that state. For example, we can see that the S&P 500 has been in the Green Zone for more than one year.

This indicator works similarly to Health status. But instead of monitoring the health of the index itself, it monitors the health of each individual “component” stock inside that index. It then displays the percentage of components in the Green, Yellow, and Red Zones.

For example, you can see that the S&P 500 currently has nearly 78% of its component stocks in the Green Zone, with roughly 8% in the Yellow Zone and 14% in the Red Zone.

When used together, these two indicators can give us an invaluable look at the underlying health of an index.

For example, when an index and most stocks within it are in the Green Zone, it’s a sign that the market is extremely healthy. We might consider making new investments (or adding to existing positions) in stocks in those markets.

Likewise, if both an index and the majority of its components are in the Red Zone, that’s an indication of a very unhealthy market we would be wise to avoid.

However, we can also gain valuable insight when these two indicators disagree.

For example, suppose an index itself is in the Green Zone, but its Health Distribution shows that more and more of its stocks are falling into the Red and Yellow Zones over time.

While that alone wouldn’t be a reason to sell otherwise healthy stocks in that index, it could be an early sign of weakness to come.

We might consider reducing our risk in any stocks in that particular market or simply keeping a closer eye on that index for any additional warning signs in the future.

On the other hand, if an index is in the Red Zone but more and more of its components are becoming healthy, it can be a positive sign. It suggests the underlying health of the index is improving, and we might want to monitor that market for new buy signals soon.

The other market health tool I want to share with you today is our S&P Sectors tool.

It works like the Market Outlook tool I just showed you. The only difference is that instead of monitoring the health of major market indexes, it does the same for the 11 individual market sectors here in the U.S.

I’ve included a current snapshot of this tool below.

So, what are these tools telling us today?

As you saw in the Market Outlook tool above, nearly every major market we follow is healthy today.

Two indexes — Canada and Japan — did briefly dip into the Yellow Zone during the worst of the correction last week. But both returned to the Green Zone the next day.

The only exception is Hong Kong, which has been in the Red Zone for several months following the Chinese government’s crackdown on financial markets earlier this year.

In addition, the index Health Distributions remain bullish too. Today, most stocks in the remaining 11 indexes are in the Green Zone. And we haven’t seen any significant rise in the percentage of Yellow or Red Zone stocks within them during this recent correction so far.

It’s a similar story with our S&P Sectors tool.

All 11 sectors are currently in the Green Zone. And the Health Distribution for all but one is incredibly healthy today.

The lone exception is the Communications Services sector, which includes many high-growth stocks that have sold off the most this fall. It currently has less than 27% of its component stocks in the Green Zone.

This isn’t ideal. But this figure has already increased significantly from its low of just 15% last week, and again, the 10 other sectors have held up remarkably well.

This could always change, of course.

But right now, these tools tell us most markets — both here in the U.S. and abroad — are doing just fine. We’re not seeing any of the usual warning signs that suggest a crash or bear market is likely today.

Having this kind of perspective is always useful. But it can be a lifesaver during volatile periods like we’ve experienced in the last couple of years.