I’ve always been an airplane buff, especially when it comes to old military aircraft.

When I was just a teenager, I was lucky enough to attend one show featuring two of the most legendary planes from Boeing Co. (BA): a WWII vintage B-17 Flying Fortress sitting next to a Cold War-era B-52 Stratofortress.

Both are remarkable airplanes, but the B-52 wins kudos for its longevity. The B-52 first took flight with the U.S. Air Force in 1955.

To this day, there are still active squadrons in service with the USAF, nearly 70 years later. And Boeing continues to provide support and upgrades to this legendary aircraft. 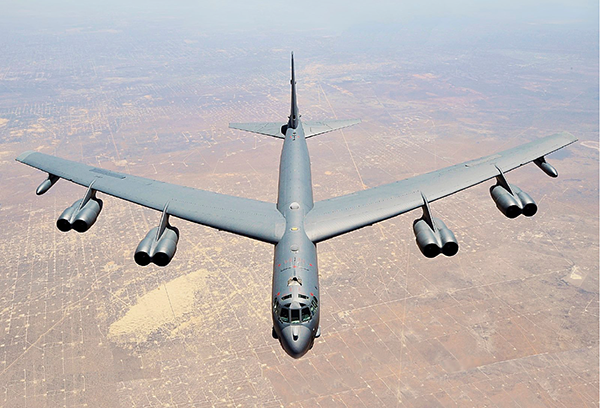 Source: Wikipedia
This company is in a league of its own, not just because of its track record of aerospace engineering feats, but mainly because building big airplanes for both the government and private sector airlines is as close to a modern-day monopoly business as you can get.

And that means pricing power. After all, when the USAF needs B-52 spare parts, there’s only one place to buy them.


Playing the Long Game with Boeing

If I were planning to just buy and hold shares of BA, our system tells me that now is not the time to do that.

It’s in the Red Zone (think of this as a stop light), in a downtrend, and is considered high risk.

With BA losing nearly a quarter of its value so far this year, I’m reminded of when Boeing Co. shares went on sale a few years ago. After doing my homework, I realized Boeing was suffering mainly from self-inflicted wounds specific to one type of aircraft, the 737 MAX family of commercial jets. And the company’s commercial aircraft accounts for only about one-third of its revenue. Its government aerospace and defense business plus global services account for nearly 70% of its business, which is still booming.

I decided to invest.

The question was, how could I do it best without committing too much capital or taking on too much risk?

That’s where a unique type of security comes in handy.

I call them alt shares, because they provide you with a great, low-cost, high-profit-potential alternative to buying a company’s plain-vanilla stock.

Alt shares are just another alternative that can deliver a lot more bang for your investment buck, in my book. They have been around for decades, but many investors don’t know much about alt shares, let alone invest widely in them.

The advantage is that you can buy alt shares for just pennies on the dollar compared to the ordinary common stock price, which means they can deliver even more upside profit potential.

Boeing is an excellent example of this. When I decided to pull the trigger on Boeing, it looked to me like the company was solving its issues with the 737 MAX and production delays.

Then I took a closer look at Boeing’s alt shares. They were trading for just $36 a share.

So, I could own the equivalent of 100 shares of Boeing for just $3,600 out of pocket. That’s 70% LESS money down than it would cost to buy the common stock.

Considering the S&P 500 was already down 17% by late May, and Boeing shares had dropped 36%, going with the lower-cost alt share option meant far less money at risk just in case stocks went even lower.

Fortunately, my timing was pretty much on the mark.

Boeing began to recover. And by this week the stock was above $163 a share, up 27% from late May. A nice gain for just two months of work. But what about the alt shares?

Or invested just $3,600 in cash and made a 63% profit using alt shares instead. I was able to invest in an iconic American blue-chip stock, one of the elite 30 Dow companies, and I did it for only 30 cents on the dollar and more than doubled my profit.

And with hundreds of other blue-chip stocks down 20%, 30%, or even 40% so far this year, there has never been a better time to invest in alt shares, which are an even bigger bargain right now.

They can also deliver far more upside profit potential at just a fraction of the cost. You can use 70% to 80% less cash and still generate big returns like 4x, 5x, and 6x your money with alt shares.

Remember that in a choppy market, everyone can see the problems.

The ones who will win are the ones looking for the solutions that opportunities like alt shares provide.

In fact, I just released the first trade recommendations of alt shares in my new service, Parabolic Profits, which members can log in to and access here.

If you aren’t a member and would like to learn more, you’re free to do so right now by clicking here.