By now, you’ve probably heard about the fleet of ships moored off the coast of Los Angeles.

Ships from Asia, which once seamlessly docked, unloaded and reloaded cargo, and went on their merry way, now sit for weeks at a time.

Many media pundits told us to expect the situation to clear in the new year.

And with a sleight of hand, officials at the port pushed vessels to dock farther out to sea so they could claim improvements.

Yet marine tracking shows zero improvements at the time of publication.

Given the inflationary pressures and supply shortages, many of you may be wondering whether things can improve.

And just as important, are there any investments to be had?

To answer those questions, we need to understand what caused the current situation, look at some key dates coming up, and then dig into what the future holds.

The Port of L.A. typically refers to the ports of Los Angeles and Long Beach, often thought of as two of the most inefficient in the world. Together, they make up the ninth largest container port complex in the world.

According to U.S. News & World Report last fall, L.A. was ranked No. 328 out of 351 container ports behind Tanzania’s Dar es Salaam. Top ports went to Japan’s Yokohama and Saudi Arabia’s King Abdullah. The Port of L.A. suffers from a variety of factors, including:

At the end of the day, it comes down to one thing, and you can probably guess what it is — COVID.

COVID stopped the world dead in its tracks.

When everything spun back up, demand outstripped capacity to deliver.

Empty containers sat at inland warehouses with no truckers to move them. That left Chinese manufacturers scrambling for boxes to stuff their products into for shipment.

When the giant global economy engine lurched into gear, labor was hard to find, whether it be at receiving warehouses, trucking companies, or other supplier factories.

Unions stepped up to operate the ports 24/7 through the end of the year.

So why haven’t things improved?

The omicron wave hampered labor in nearly every market and industry, ports being no exception.

Last Thursday, newspapers reported that about 800 workers were out sick from the Port of L.A., cutting into the total port workforce by 10%.

Across the Pacific, China is struggling to maintain its zero-infection policy with the more transmissive variant.

That created major backlogs at ports such as Shanghai, Dalian, Tianjin, and Shenzhen. The New York Times reported that even Toyota and Volkswagen had to suspend operations due to lockdowns in Tianjin.

All of that will come to a head soon as China prepares to go on holiday for the Lunar New Year on Feb. 1.

Typically, that means heavy volume pushed out right before the shutdown.

The weeks that follow are a key inflection point for supply chains as shipping traffic tends to slow, and hopefully, omicron cases begin to ease.

The graph below charts container volume for the Port of L.A. in 2018 and shows typical seasonal volumes. 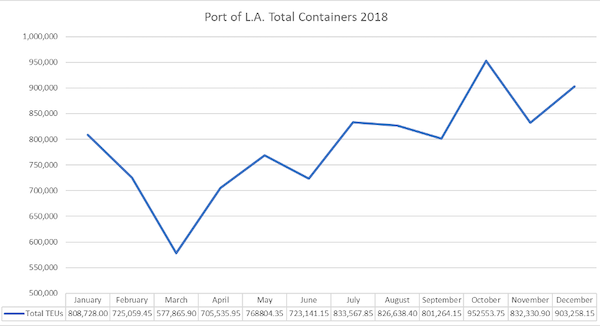 This is the time when we want to pay attention to see if ports are able to make headway into the backlogs.

What the Future Holds

Despite dysfunction in Washington, politicians managed to put money in the bipartisan infrastructure law to help improve ports — $17 billion, to be exact.

The Port of Long Beach got a boost in December when the federal government awarded $52.3 million to help fund a rail facility so the port could move cargo by train, making operations more efficient.

I have a theory that when manufacturers start looking to test automated trucks, they might consider short-haul movements from the ports to local warehouses as a way to help alleviate truck driver shortages.

Unfortunately, even if the situation clears, we’re stuck with more demand than supply for the foreseeable future. And I’m talking about not just the next few months, but likely several years.

The Fed and central banks may be able to choke off some demand by raising interest rates.

But, COVID only highlighted problems with the nation’s infrastructure that already existed.

And that’s where these investment ideas come in.


Investing in Upgrades and Logistics

The massive infrastructure package that passed last year is only a fraction of what the U.S. needs to move into a 21st century supply chain powerhouse.

I expect more money to come in from the public and private sectors over the next several years, regardless of the political affiliations in Washington.

That’s why a quick search for industrial, transportation, and construction stocks in TradeSmith Finance yielded some fantastic choices.

Each of the top four companies shown displays great momentum health and qualifies for at least three of our proprietary strategies, meaning these are high-conviction stocks.

In fact, the third one on the list, Trinity Industries (TRN), offers a dividend yield of more than 3% at the moment.

These are just a handful of ways to play the coming infrastructure boom.

The real question is whether we should focus more on the builders or the transporters. Both are important. But why pick one over the other?

Email me and let me know your thoughts. I can’t respond to all emails, but I promise to read every single one.