Editor’s Note: Today we’re bringing you a guest editorial from TradeSmith Senior Analyst Mike Burnick. We think you’ll appreciate his research and analysis. Keith will be back tomorrow with more market insights.
It has been a wild ride for stocks so far this year, no question.

Stocks plunged in January and February, only to stage a surprisingly strong rebound rally in March. Investors are now trying to figure out which way stocks go next.

But what if you had a crystal ball and could see the likely path stocks could take from here?

Well, a bit of stock market history combined with our powerful Timing by TradeSmith tools can be your best guide to what’s ahead! 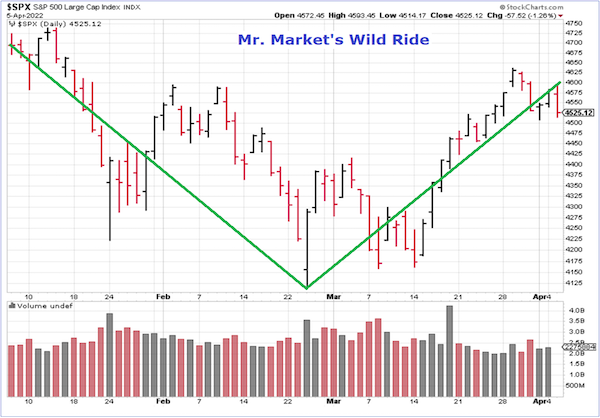 I bet plenty of investors ended the first quarter of 2022 with a case of whiplash after the roller-coaster ride stocks have been on, as you can see above.

But March came in like a lion, with the S&P making up a nice chunk of those losses.

Last quarter wound up being one for the record books, with a double-digit top-to-bottom decline followed by a double-digit advance. Since 1945 there have been only 11 other quarters that produced that kind of up-and-down volatility, according to research from Bespoke Investment Group.

The good news is that after such roller-coaster rides in the past, stocks posted strong results over the following year. In fact, the S&P 500 produced average gains of 29.7% over the next 12 months following the 11 other quarters since 1945 that showed this kind of intense volatility.

So, is it safe to say the worst is over and it’s time to buy? Perhaps, but you should be prepared for more twists and turns ahead for the markets.

April has typically been the second-strongest month of the year (after July) for the S&P 500 based on data going back to 1928, according to Bank of America Global Research. This month shows average gains of 1.4% and is up 66% of the time historically.

The Fed has grown increasingly hawkish about the need to raise rates to combat accelerating inflation. And investors are worried the Fed could go too far too fast. Current fed funds futures pricing says short-term rates could end 2022 between 2.50% and 2.75%, up from zero in January.

But fears of higher interest rates are normal whenever the Fed starts a rate tightening cycle. And those fears are often misplaced.


The S&P 500 often sells off either leading up to or immediately following the initial rate hike. That certainly has been the case in early 2022.

But then, after a few weeks, stocks usually settle down and begin to rally again. Historically, these rallies have been powerful. On average the S&P has pulled back about 3.9% in the month after the first interest rate increase, but has then gone on to gain 12% a year later!

Our own Timing by TradeSmith indicator tells us a similar story about the path stocks should take from here. 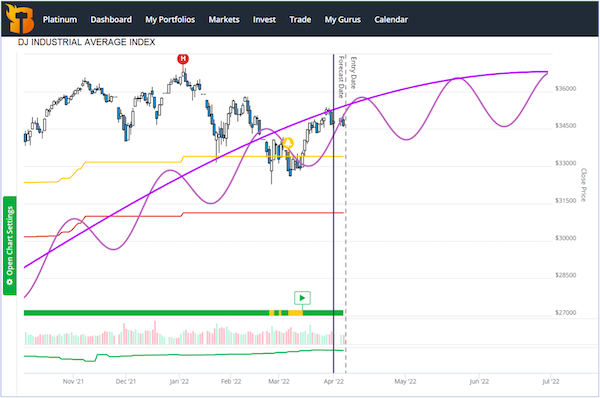 In a nutshell, as you can see above, our timing forecast of the Dow Jones Industrial Average calls for some additional market volatility in the near term, as shown by the purple wavy line. But the longer-term cycle (indicated by the long, arching purple line) shows an uptrend continuing into July with a pattern of higher highs and higher lows projected for stocks.

Bottom line: Our own Timing by TradeSmith forecast syncs up nicely with the historical record, telling me that stocks should perform well in the year ahead in spite of the Fed raising rates.