Not too many years ago, a long-running General Motors Corp. (GM) ad campaign boasted that its Chevrolet lineup was the “heartbeat of America.”

But I can tell you with complete confidence that it’s Ford Motor Co. (F) — not Chevy — that’s the automotive backbone of the good ol’ USA.

After all, it was Ford that brought mass production to the auto industry — and made it possible for workers to buy the very cars they were building.

It was Ford that:

The bottom line is that Ford is an American icon — not just in cars and trucks, but in the fabric of daily American life.

It also just toppled Wall Street’s expectations in its most recent quarter, which I’ll have more about in just a bit.

So if you’re going to buy an auto-related stock, Ford’s the only play, right?

Indeed, that brings us to the quandary that investors like you and me often face: When it comes to a business sector, asset class, investment index, geographic market, or powerful new trend, what’s the right move to make? What should you buy? And, just as important, what should you avoid?

These are important questions, ones that I like to address with an investing exercise I refer to as Buy This, Not That.

And we’re going to settle the answers for the auto industry today.


Not Losing Is a Win in Itself

We’ll spotlight a pair of opposing candidates in a specific industry, market, sector or other opportunity, and one of our experts will use our proprietary analytics to show you which one to buy and which to avoid.

Think of it as an old-fashioned duel, investing style. One of the opposing candidates will win, and the other one will lose — so you don’t have to.

That’s one key to wealth creation and investing success that too many folks seem to forget: while winning is crucial, “not losing” — you know, avoiding the miscues that can set you back years — is maybe even more important.

Buy This, Not That will do that for you.

So, let’s get started with a look at two auto-sector investments.

One of the companies is automaker Ford. The other is Progressive Corp. (PGR) — you know, the insurance firm with those cringeworthy “Flo” commercials.

One to buy. And one to avoid.

You may be surprised which is which.

BUY THIS: Go with the Flo

If the Flo commercials aren’t enough to persuade you that Progressive qualifies as an “auto stock,” consider this: In a recent analysis, Barron’s said Progressive was the nation’s “best-run auto insurer,” and the “class act” of the U.S. auto insurance industry.

And that’s a fact-based assertion, according to a brand-new report by Fitch Ratings, which predicts that Progressive and GEICO will leapfrog State Farm on the top 10 list of personal auto insurance leaders in terms of premium volume next year.

And “premium” is the watchword here: It’s the reason investing icon Warren Buffett is a massive fan of insurance firms.

The “Oracle of Omaha” digs the steady performance, the simple business model, and the predictable cash flow from those premiums (known as the “float”) because he understood very early on something that even insurance industry insiders didn’t fully comprehend.

Because they function on a collect-now/pay-out-later business model, insurance companies take in premiums in payment for the policies they sell, usually investing that cash in something conservative, like U.S. Treasury bonds or mortgage-backed securities (MBS).

Their profit is the premiums plus the investment income minus the claims.

Insurers will hike premiums if claims begin to rise.

Buffett made a powerful discovery: Because payouts come in the long run — and can be highly predictable — he realized he could invest some of that float in higher-returning assets, like stocks.

GEICO was one of his early investments; through his investment vehicle Berkshire Hathaway, he ultimately bought the whole company.

Progressive isn’t a Buffett play. But it’s a strong GEICO rival — and a strong play itself.

In fact, on the list of the biggest auto insurers in the U.S., Progressive comes in at No. 3, just behind GEICO. From a financial standpoint, when so many other companies are worried about how they are going to keep the lights on, Progressive holds a $4.84 billion war chest of total cash.

Also, dividends increased from $0.28 per share in 2013 to $6.40 per share last year. However, dividend payouts are based on company profits, meaning they can vary from one year to the next.

What’s great about insurance carriers is that they behave a lot like consumer-defensive stocks; it’s rare to see massive revenue declines because of recessions.

That’s completely different from auto companies like Ford, which are tied to the ups and downs of the economy; this is why they’re known as “cyclical stocks.”

So let’s take a look at Ford — nicknamed the “Blue Oval” for the royal-blue badge that adorns the grilles of its cars and trucks.

NOT THAT: “Blue Oval” Blues

Late one evening just a few short weeks ago, I was perusing the day’s headlines when this one jumped off my iPad screen:

Source: Yahoo
It just so happens that early that same day, I had looked at our Health Indicator and noticed that Ford was firmly ensconced in our Red Zone.

An analysis shows why.

Car production is pretty straightforward. First, you source components, from the steel used for frames, to the aluminum used for body panels, to the semiconductors that serve as the brains of the vehicle.

Then, all those pieces get put together, creating finished cars and trucks that are sold through networks of dealerships.

When you first look at Ford’s latest earnings report, you’d think that everything was copacetic. For instance:

But the numbers are ignoring a key issue: a pesky thing known as the “supply chain.”

Source: GoodCarBadCar
You’ll notice that sales in 2022 have still not returned to 2019 levels, and Ford is still being hamstrung from supply-chain issues that are beyond its control.

That includes the serious shortages in semiconductors and in lithium batteries, which are crucial to Ford’s future plans in the electric vehicle market.

The Duel: A Tale of Two Tapes

We’ve taken a look at both companies from a qualitative vantage point.

Now let’s take a technical dive — since I think that tells the real story here.

First, let’s look at a chart of Ford. 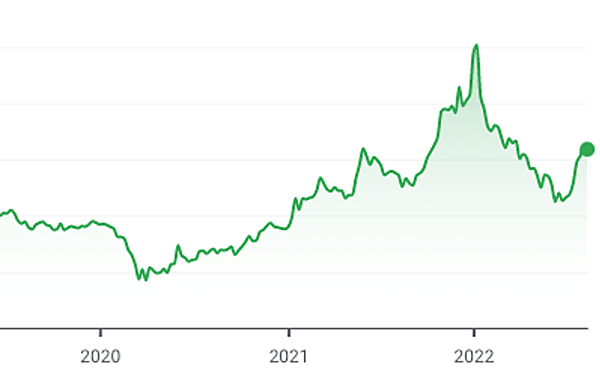 Source: Google Finance
Ahead of the COVID-19 pandemic, Ford’s stock price meandered sideways, or traded down.

But coming out of the pandemic, Ford burned rubber — and its shares zoomed — thanks to an inventory squeeze that imbued the Blue Oval with a whole lot of pricing power.

That pricing power remains. But production will be tight through the end of this year and into 2023. And a hawkish U.S. Federal Reserve has boosted the rates on new car loans, a de facto sticker-price increase.

The aforementioned recent earnings report — with better-than-expected results — has boosted Ford’s stock price of late. But our analysis shows that this may be nothing more than a temporary bounce during a bearish stretch.

Compare that with the “tale of the tape” for Progressive: 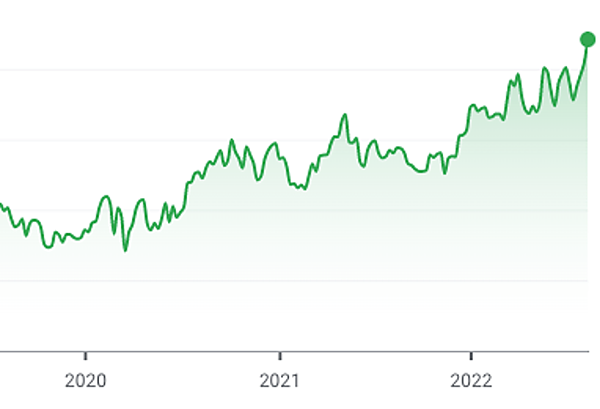 Source: Google Finance
Although Progressive flirts with the Yellow Zone from time to time, it’s mostly maintained a steady bullish trend — putting it squarely in the Green Zone.

The stock market is a forward-looking animal, and from a simple risk/reward vantage point, there’s much more uncertainty (and more risk) with Ford and its stock price than there is with Progressive.

In our Buy This, Not That auto sector duel — Progressive is our “Buy This” winner… and Ford is our “Not That” loser.

My hope is that through the new features we are rolling out in TradeSmith Daily, we are able to help you cut through the increasing noise that is out there, focus on what’s important, remove the emotion from investing, and put new opportunities and investments to avoid on your radar.

With that in mind, is this a series you would like to see again moving forward?

Let me know what you think of our new Buy This, Not That feature for TradeSmith Daily.

And keep watching — we’re still developing other editorial features for you.