A recession is in the cards and will directly affect bank stocks.

Here’s how I expect it to play out:

The prevailing wisdom has been that banks benefit from an environment of higher interest rates.

Yet the performance of big bank stocks so far in 2022 tells a different story.

Citigroup Inc. (C) has fared slightly better, but it is still down roughly 12.5%.

However, regional banks may be heating up.

And I want to explain why this is and how we can turn this into some investment ideas.

Take a look at the technical health of the top 10 holdings of the Financial Select Sector SPDR Fund (XLF): 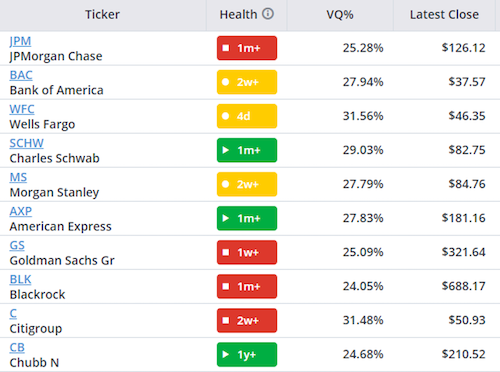 Source: TradeSmith Finance
Now I want you to compare that to the top 10 holdings of the SPDR S&P Regional Banking ETF (KRE):

Source: TradeSmith Finance
Clearly, the regional banks are a sea of green compared to the big banks.

One big bank in the red, JP Morgan, said in its latest earnings call that it set aside more cash to cover potential loan losses due to a recession, effectively offsetting the benefits from higher interest rates.

And this issue isn’t just for JP Morgan…

Many of the big banks expect loan losses to increase in the coming months.

That’s why we’ve seen the health of many of these stocks move from the Green Zone to the Red Zone in TradeSmith Finance.

In comparison, the regional banks are faring much better.

Here’s why, along with four that I think are the best of the bunch.

In a previous edition of TradeSmith Daily, I covered net interest margin. 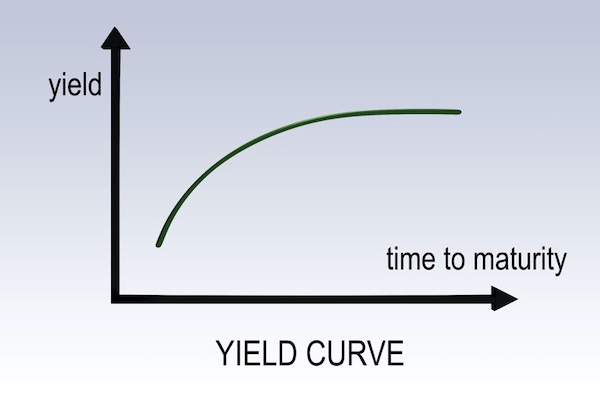 Source: Shutterstock
Banks pay depositors interest on the cash kept at the bank based on short-term rates.

They then lend to borrowers at longer-term rates.

For most banks, this makes up a significant chunk of their profits.

However, there are other revenue sources, especially at large international banks.

For example, in the most recent quarter, JP Morgan earned just 37.6% of its revenues (excluding its corporate segment) from consumer and community banking, which includes home, auto, and local business loans.

The vast majority of the company’s revenues (41.7%) came from corporate and investment banking services.

In fact, of the $31.6 billion in total revenue, 44.3% was attributable to net interest income.

Let’s compare that with one of the top regional bank stocks from our TradeSmith platform, SouthState Corp. (SSB), which operates mainly in the Southeastern U.S.

While that hurts them in low-rate environments, it’s a tailwind in this one.

Digging in a bit further, we want to look at the type of loan portfolio held by SouthState Corp. 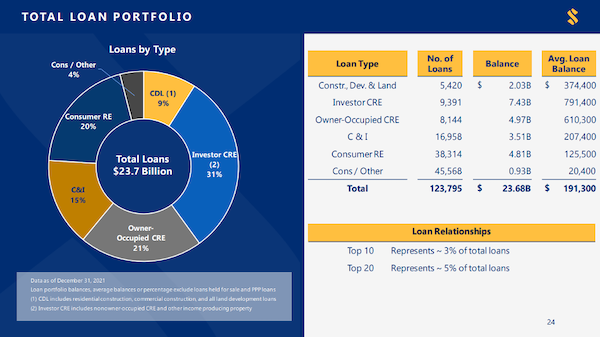 So what if you want a regional bank that doesn’t have as much consumer exposure? The difference here is that Heartland Financial focuses more on commercial and industrial loans, as well as agriculture.

This ties in nicely with my general outlook for the markets.

And when we compare the net interest margin for the two, Heartland Financial comes in slightly higher at 3.12% for the previous quarter compared to SouthState Corp.’s 2.78%.

Digging into the investor relations section of every regional bank can be a headache, but we can make this WAY easier on ourselves.

First, we operate under the assumption that regional banks typically do earn more from net interest margin as a proportion of their total revenues than your typical large bank.

Next, we filter those regional banks through our Screener tool at TradeSmith Finance and look for those in the Green Zone for health and an uptrend.

From this narrowed list, we can dig into the financials of the individual companies as we did above.

Now, I promised to give you a sneak peek at some of the best stocks out of our system.

As promised, here are the top four stock results for regional banks with the highest conviction in our system.

Source: TradeSmith Finance
In fact, the first name on the list pays out a dividend yield that’s above 3%.

Now, one word of caution. Regional banks are called regional because they tend to operate in specific parts of the U.S.

That means, if you want to get involved in this sector, you may want to pick up several of these banks that cover different areas (industrials, agriculture, etc.).

What kind of bank portfolio do you think will perform best in the coming months? One with exposure to agriculture? Oil and gas? What about industrial parks?

Email me what you consider to be the ideal loan portfolio for a bank in 2022.