If you think it’s been a rough year for stocks, just take a look at the carnage in bonds.

I sincerely hope you don’t own a “balanced” portfolio of something like 60% stocks and 40% bonds.

For decades, that’s what high-priced Wall Street money managers have typically recommended for “conservative” investors. But it’s not working.

In fact, the so-called 60/40 portfolio has resulted in double-barreled losses for investors this year, down 19.4% year-to-date through the end of August — and it’s on pace to post its worst performance since the Great Depression. Ouch!

I warned TradeSmith Daily readers back in May about this rare simultaneous downtrend in both stocks and bonds. It hasn’t gotten any better since then.

And bonds in particular could be a big drag for your investment portfolio going forward.


As a refresher, the 60/40 portfolio has been the classic, go-to asset allocation for prudent investors for as long as I can remember. The idea is that this mix of stocks and bonds diversifies your investments. When stocks underperform, bonds should outperform, and vice versa.

So, this asset allocation should ideally smooth out the ups and downs in markets over time. And it worked well… in the past.

For many decades, the 60/40 allocation returned almost 9% a year on average. But I fear those days are over.

Just two years ago, in 2020, 10-year Treasury bond yields hit a ridiculously low 0.50%. The government was only willing to pay you half of one percent of interest on your money for the next 10 years. A return that meager is sheer lunacy. Fast forward to today and inflation has surged to 40-year highs. The Federal Reserve has already jacked up short-term interest rates from near zero in 2020 to 2.5% now.

And the Fed has promised more rate increases to come. Fed funds futures prices indicate a high probability of reaching 4% by year end.

Higher interest rates AND higher inflation at the same time is tough on stocks, true. But it’s an absolutely toxic combination for bonds. That’s because bond prices move in the opposite direction of interest rates. Plus, high inflation like we have today quickly erodes your purchasing power.

In other words, no one wants to lend money to Uncle Sam for the next 10 years at ridiculously low interest rates when rates are on the rise.

It’s really no surprise that so far this year, $284 billion annualized has flowed OUT of bond funds and ETFs, according to BofA Global Research. Investors are bailing out of bonds as fast as they can. And where is that money moving?

A good chunk of it is going back into stock funds. Equity inflows from investors are running at a $268 billion annualized clip so far this year.

And I think investors are onto something by siding with the 60%.

Market history, plus my own personal experience with 35-plus years in this business, tells me that stocks are likely to win out over bonds in the years ahead. Let’s look at the facts, then play “what if.”

The Fed is on record saying it will do whatever it takes to bring down inflation — even if it results in sharply slowing growth, and possibly recession. And it’s putting its money where its mouth is, already aggressively raising rates this year and likely to continue doing so, as noted above.

Let’s say the Fed succeeds in bringing inflation down. OK, that may be a big if, but for the moment go with me on this. Personally, I think inflation pressures are already easing now. And the “official” inflation rate may soon roll over on its own. Higher interest rates should speed up that process.

The one thing the Fed does not want to be accused of is wavering on inflation. That’s why it’s been talking so tough.

The last time inflation was a problem, in the 1970s, the Fed blinked… several times. It eased short-term interest rates too soon, and inflation took off again as a result. Fed Chair Jerome Powell is dead set against repeating that mistake.

So, let’s say the Fed succeeds at lowering inflation. I don’t believe it will be too quick to cut interest rates. It’s likely to keep rates higher for longer than expected just to make sure inflation is in check.

If that’s the case, then history says stocks, not bonds, will be the biggest beneficiary of high but falling inflation. 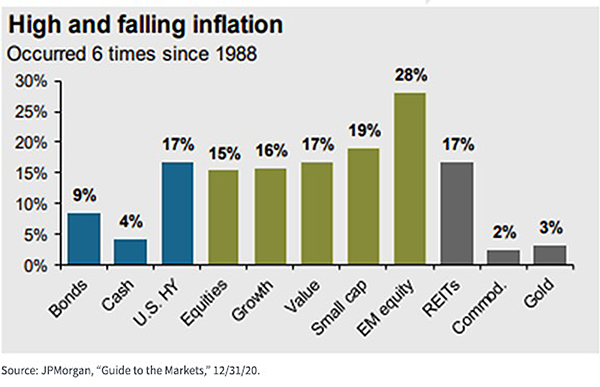 The chart above displays the average returns of different types of assets when inflation is high and falling. As you can see, stocks tend to perform very well, up an average of 15%. Value stocks, small-cap stocks, and emerging market stocks perform even better. Bonds (at far left), not so much.

While higher-risk junk bonds tend to do well, up 17% on average, government bonds typically gain just 9%. That’s because after inflation peaks and begins to decline, the profit picture for stocks immediately improves. By contrast, interest rates can remain “sticky” at high levels for a while longer, as the Fed wants to be sure that inflation keeps declining. And that’s bad for bonds.

For my money, I would rather bet on a bigger rebound in stocks than boring old bonds in the year ahead.