As a successful entrepreneur whose specialty is technology, I understand as well as anyone the paradigm shift the American workplace has experienced from the COVID-19 pandemic. Colleagues hear me say frequently that the pandemic accelerated the start of the work-from-anywhere era by at least five years.

The technology is amazing. And what it lets you do is even greater.

But there’s still something to be said for in-person collaboration – especially with a company as creative as TradeSmith.

To that end, this week, we organized an “office day” for the team members who work in Baltimore. It was a reminder of just how special a company TradeSmith actually is.

Our software tools spotlight the best moneymaking opportunities – and allow folks to sidestep the risks that populate a volatile market like the one we’re navigating now.

Just as special: Our Customer Success team members, who answer subscriber questions and give us a highly personal window into the stock market… and investor sentiment.

I like to tell people that ours is a “greed versus fear” business.

And right now, there’s certainly a lot to fear, including:

Taken together, those ingredients created a recipe for panic. Increasingly here at TradeSmith, we’re hearing from folks panicking over how much these events will take away from their retirement savings and income.

They’re telling us they don’t want to buy new stocks.

They’re focusing less on gains and more on avoiding losses.

Afraid to do anything, they wind up doing nothing.

Indeed, recent callers to our Customer Success center have been asking if they shouldn’t just abandon the stock market altogether.

Investors with that mindset are setting themselves up for a classic – but massive – mistake.

While our Customer Success team can’t give specific (or individual) investment advice, team members can help demonstrate how our proprietary tools can be used to give you an advantage in such an uncertain market – so that you make the best decisions when it comes to buying or selling or managing risk.

With all the uncertainty we face right now, the next 30 days could be hyper-volatile.

And in the face of all that turmoil, you can’t afford to make any mistakes.

I’m here to help you with that.

I’m going to outline the five biggest mistakes investors can make – and show you how to avoid them.

We’ll start by taking a quick peek under the hood of the U.S. stock market.


The Big Three in Peril

A look under the “Markets” tab on TradeSmith Finance reveals that both the S&P 500 and the bellwether Dow Jones Industrial Average have dipped into cautionary yellow territory. 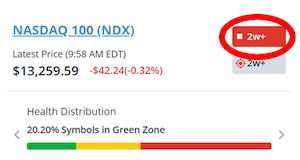 This positions them halfway to their stop-loss point.

And the tech-focused Nasdaq 100 Index is already sidelined (in the Red Zone), with only 20% of its stocks in a green “healthy” state. In fact, a third of all the market indexes TradeSmith monitors are in the Red Zone.

That tells me that at least some of our readers’ fears are justified. In fact, when you look closer at what’s happening in the markets, you get an unsettling picture.

As I mentioned a moment ago, the S&P 500 has fallen 12% since the new year began. That already exceeds the 10% decline it takes to qualify as a market correction. But it’s short of the 20% free fall that qualifies as a bear market.

Plus, nearly 40% of all the stocks that make up the S&P are already stopped out in the Red Zone.

Here’s the thing, though.

There are always places to make money.

But the key is avoiding the mistakes that can cut the heart out of your portfolio.

And with all the uncertainty we face, with all the volatility we’re expecting, the next 30 days could be crucial to your future.

And during the next month, there are five big mistakes you have to avoid.

Let me tell you about them…

Mistake No. 1: Pulling the ‘Eject’ Lever

A correction should get your attention. But it shouldn’t cause you to abandon ship.

That’s the No. 1 mistake investors make during a down market – pulling their money out and running.

Market corrections of 10% or more happen a little more than once per year. In the past 75 years, a decline between 5% and 10% has occurred 84 times.

And the average time to recovery is a single month.

A decline between 10% and 20% has occurred 29 times, with an average time to recovery of only four months.

More serious declines are rare. Since 1946, an S&P 500 decline of 20% to 40% has occurred only nine times. And a decline of greater than 40% has happened only on three occasions.

Dramatic, recessionary plunges take significantly longer to recover from; historically, the recovery for a 20% to 40% decline takes just over one year, while the recovery for a decline of greater than 40% takes just under five years. But don’t forget the silver lining – markets do, eventually, bounce back.

Indeed, the current drop of 12%, while serious, suggests a recovery within the next couple of months.

Truth be told, you need to flip your thinking: Far from being a reason for escape, a correction of 10% (or more) could be considered an entry point.

Don’t run for the hills; it’s not the answer.

The Chicago Board Options Exchange (CBOE) Volatility Index measures the relative volatility in the stock market based on divergences in near-term option price changes as a way to quantify overall stock market risk – specifically in the S&P 500.

Forward-looking, the VIX is the tool the CBOE uses to chart volatility expectations for the next 30 days.

Investors looking to make decisions can leverage the VIX to factor in fear and stress levels in the markets.

Any value over 30 signals heightened volatility, risk, and investor fear.

TradeSmith algorithms rate the VIX with a sky-high-risk factor of 95%. That’s a lot of documented fear. 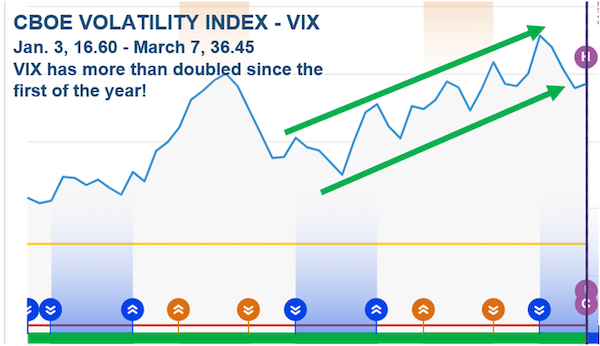 That fear is translating into revved-up volatility. And that volatility is being exacerbated by the Russia-Ukraine conflict. As long as fear and uncertainty persist, don’t expect any volatility “relief.”

Investors should expect more volatility in the weeks to come, according to David Bridges, Fidelity’s geopolitical risk analyst, who said, “This is the start of a new Cold War.”

And as a TradeSmith subscriber, you have a major competitive advantage.

As we’ve shown you here today, we can give you a window into market sentiment, and we can do more. Using TradeSmith’s tools, you can monitor the specific health of your portfolio – right down to the individual stocks – to make “keep” or “cut-them-loose” decisions.

And if you do cut some stocks loose – while other investors continue to run for the exits – you can use our tools to pivot, wade back in, and snap up some bargains.

Which leads me to the next mistake to avoid.

Mistake No. 3: Ignoring the Opportunities

The broad-market indexes may be tanking, but opportunities still exist.

Just look at what’s happened in the energy sector. U.S. investors are benefiting from rising oil prices and the Western world’s rejection of Russian oil.

A moment ago, I showed you how the S&P 500 had pulled back into the Yellow Zone. But the industry sectors that make up the SPX reveal plenty of stocks with bullish potential.

Each of these sectors has an associated exchange-traded fund (ETF). The ETF for the energy sector is the Energy Select Sector SPDR Fund (XLE). Not only is XLE in an uptrend, but 93.75% of its holdings are in the healthy Green Zone as well.

That means XLE is fertile ground for uncovering stocks you might use to replace ones that have triggered their stop-loss signal. No need to stand on the sidelines.

Mistake No. 4: Becoming the ‘Deer in the Headlights’

Despite its up-and-down nature, the stock market remains the largest, most powerful wealth generator ever created. So even if you avoid the “run-for-cover” miscue and remain invested, you still must be nimble – meaning you can’t be the proverbial deer in the headlights.

Therefore, over the next 30 days, be sure to:

But if you’re looking for something more, make sure to avoid this last mistake.

Investors focus so much on wins – capital gains – that they forget about income.

TradeSmith income expert Mike Burnick, our newest senior analyst, has developed a new cash-flow strategy that works in up or down markets.

In fact, you can “program” the stock market to deliver de facto dividends “on demand” – whenever you want, and however you want.

The strategy, dubbed Dividends on Demand, is a conservative system that extracts the biggest returns from the stocks most investors think of as “boring.”

You can still watch the replay here.

Follow the signals, ignore the noise, and don’t succumb to emotion.

TradeSmith’s tools can do all this for you – and more.

And if you want a chance to generate income from the markets on a weekly basis, be sure to watch Mike’s presentation.