Editor’s Note: There’s no doubt about it: The market is going haywire. With unpredictable economic conditions causing wild fluctuations, trying to make the right investing decisions can feel more stressful than ever. Luckily, you don’t need to navigate these choppy waters alone. Tonight at 8 p.m. Eastern, Senior Analyst Mike Burnick is debuting a new strategy that can help you generate income regardless of broad market conditions — and gain some well-deserved peace of mind. Click here to register for his free summit.
Folks are worried about their retirement now more than ever.

And with inflation still at 40-year highs, the Federal Reserve adopting a hawkish stance, a still-broken supply chain, and geopolitical events like the war in Ukraine creating all sorts of wild cards, stagflation is becoming more and more part of the conversation.

For folks who weren’t around in the 1970s, stagflation is the ruinous combination of high inflation, tepid economic growth, an employment malaise, and few policy tools that can make an impact.

Coworkers here who navigated that stagflation-afflicted era in the ’70s remember some worrisome parallels – like the rocketing food prices, shortages at the grocery store, and soaring prices at the gas pump. That sounds familiar.

Pundits are fanning the fear flames, invoking the term “stagflation” with increasing frequency.

Don’t succumb. There are moves you can make today — including one we’re going to tell you about right now.

Here at TradeSmith, we have three main goals.

We’re going to do all that for you here today.

I’m going to tell you exactly what stagflation is and give you context to defang this economic boogeyman.

And I’m going to introduce you to a strategy that’s perfectly suited to the environment we face now.

At its deepest level, stagflation is one of the most difficult economic environments for central banks and policymakers to combat, in part because definitions are imprecise.

Most experts agree that it includes high inflation combined with low economic growth. And typically, stagflation includes high unemployment, though not always.

You see, high inflation usually coincides with low unemployment and zooming economic output. That’s why you hear statements like “the economy is in danger of overheating.” 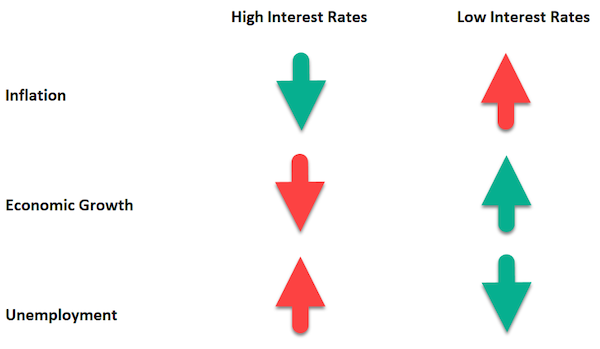 Source: TradeSmith
So why does everyone fear stagflation?

Because the normal levers pulled by central bankers and policymakers inside the Beltway don’t work.

The problem is that stagflation is usually driven by “supply-side” issues – like those we’re facing today. Central banks and fiscal policy can’t induce more supply – at least, not in the short term. They can only spark demand.

Back in the “Disco Days”

There are a lot of parallels between the challenges we’re facing right now and what investors and consumers had to deal with back in the 1970s. There are differences, too.

In the early 1970s, then-President Richard Nixon had inherited the Vietnam War and a recession from his predecessor, President Lyndon B. Johnson – not to mention the escalating government debt brought on by Johnson’s Great Society programs.

Since the end of World War II, most developed economies were governed by the Bretton Woods Agreement of 1944. This agreement created a pegged-rate currency system, in this case using the U.S. dollar.

At the same time, the U.S. dollar was fixed to $35 per ounce of gold to bolster confidence in the greenback. That meant every member country – from Japan to the United Kingdom – could give their dollars back to the United States in exchange for the “yellow metal.”

The massive deficits brought on by the Great Society, along with high inflation, made member countries wary of the dollar, and they started to swap those greenbacks for gold. Pretty soon, it became apparent that America didn’t have enough gold to cover the ongoing requests.

In 1970, President Nixon took the dollar off the “gold standard” fixed rate and let gold float. He also implemented a 90-day freeze on prices and wages as well as a 10% import surcharge to tame inflation, which was around 5.84%, according to the Federal Reserve. Unemployment had also risen to 6.1%.

The “Nixon Shock” was an ironic success as economies around the world didn’t collapse and doomsday scenarios faded into the background. Inflation dropped to 3.27% by the following year.

However, oil embargos and an overheated economy pushed inflation back above 10% by 1974, when a recession hit. Unemployment jumped to 9% by 1975.

It wasn’t until the early 1980s that the Fed, led by Chair Paul A. Volcker, jacked interest rates up to almost 20%. This drove the economy into a recession that sent unemployment back above 10% in 1982 from 5.6% in 1979. However, he finally killed inflation.

One of These Things Is Not Like the Other

At a high level, both the 1970s and what we’re facing today share eerie similarities, including:

That’s about as far as most financial-news networks take things. However, there are some key differences:

The fear of many market forecasters is that the Fed’s easy-money policy pulled demand forward so much that we’re setting ourselves up for another “Lost Decade.”

Supply-side issues in the 1970s were entirely driven by energy. Today, the issues are much broader. We experience bottlenecks trying to get furniture from China or steel from Japan.

These supply-side issues cannot be fixed by the Fed. All the central bank can do is what it did in 1980: raise interest rates until demand finally breaks.

Not by any stretch.

And most of us, especially those in retirement, rely on the income that comes our way from relatively safe sources – mostly government and corporate debt.

The challenge: That debt will lose principal value as interest rates increase, which means the value of your portfolio will decline.

And if you think stocks are going to save you, think again: Just look at what’s happened over the last few months as the markets reacted to the current economic outlook.

We are in for a volatile market, even if stocks truly go nowhere over the next decade.

So, how do we protect ourselves and even prosper under these conditions?

Now more than ever, it’s important to own high-quality names that pay consistent dividends.

Yes, share buybacks help. But most of those occur when stocks are at all-time highs. Wouldn’t you rather decide how to allocate the shareholder returns rather than have the company do it for you?

Dividends give you the flexibility to either reinvest or generate income you can use in retirement.

Plus, we’ve already seen money flow out of high-growth technology stocks and into more defensive sectors like consumer staples and utilities, both known for paying dividends.

That leads me to the perfect strategy for dealing with the present climate.

If you’re a regular reader, you know that I’ve been adding more education and analysis – including coverage of what I like to refer to as “forever stocks.”

There’s a way you can take core-holding dividend stocks and use them to add some serious cash-flow “juice” to your portfolio.

And this can work when stocks are going up or down.

It can work in bull markets or bear markets.

Best of all, you can time this cash flow to hit your checking account when you want it to.

You’re essentially “programming” the stock market to pay you on your schedule – to pay you “on demand.”

For those who live off their portfolio, this is a great way to generate regular payouts.

I could try to boil down this entire strategy for you into several articles, but I don’t know that I would give this topic the justice it deserves.

That’s why I enlisted Mike Burnick, Senior Analyst here at TradeSmith, to share a strategy that combines these elements into a simple plan that ANY trader or investor can use.

I know you’ve probably already seen a few of our emails highlighting Mike’s special summit tomorrow. Maybe you ignored them up until now.

But I promise you this: What Mike has developed here is really something special.

Take a few minutes to hear what he has to say.

The strategy is made-to-order for today’s whipsawing uncertainty – when your retirement portfolio is under attack.

Listen to his ideas and judge for yourself.