Editor’s Note: This question-and-answer session was first shared with the members of Senior Analyst Mike Burnick’s paid-up services.
As we start a new year, I thought it would be a great idea to see what’s on your mind and answer some of your most pressing questions for a special issue that we’re calling Office Hours.

In college, professors open their doors for “office hours,” which allow students to ask questions about the course material or anything related to the subject matter outside of the limited and sometimes hurried classroom time.

It helps the student because they can more quickly find answers, discover other resources, and gain a stronger understanding of the course.

I want to add that same benefit to your membership by offering my own version of office hours.

I recently “opened my door” to your queries, and you did not disappoint, sending in lots of excellent questions.


Today, I’ll share my answers to your individual and collective questions that I think will benefit members the most.

Q: History states that bear markets are much shorter than bull markets. Do you think we’ll finally see light at the end of the tunnel of this bear market? — Kaleb J.

You are entirely correct, Kaleb, in pointing out that bear markets are thankfully much shorter than bull markets. The average length of a bear market over the past 70-odd years is less than one year. And keep in mind that historically, the S&P 500 usually bottoms out five to six months on average after a recession starts.

In fact, about half the time, the stock market is back above breakeven by the time the recession is “officially” declared over. So, if you believe we may already be in a recession, and plenty of folks do, then the worst of the sell-off in stocks may be over.

Plus, the S&P 500 is still down nearly 20% from its highs. And if it climbs back to breakeven by the time a recession ends, that would be a sizeable stock market rally you do not want to miss.

Q: Will tech stocks rebound? If so, when do you think that will happen? — Mary G.

That is a great question, Mary. There is no doubt that tech stocks got spanked the hardest in 2022. And those companies with the weakest earnings and/or cash flows were hardest hit of all. I do think the cream-of-the-crop technology stocks will come back just fine — think Microsoft Corp. (MSFT), Alphabet Inc. (GOOGL), Amazon.com Inc. (AMZN), and Netflix Inc. (NFLX) — but it may take some time.

After the dot-com bust in the early 2000s, leading tech stocks languished for years.

For example, MSFT peaked in 1999 and didn’t meaningfully break that price level until 2015… 16 years later. But that presents a somewhat distorted picture.

The reality is that from the MSFT bottom in 2000, shareholders gained a spectacular 250%-plus return by the end of 2015. Many of this year’s beaten-down tech stocks could produce similar gains from today’s distressed valuations in the years to come. But it may indeed take years.

Q: Does Mike have confidence that the Fed can get inflation under control?

I hate to break it to you, but the Federal Reserve Board is largely staffed with academics and economists who have never run a real business a day in their lives, much less invested money for clients. There are exceptions, mind you. Neel Kashkari, President of the Federal Reserve Bank of Minneapolis, is a former investment banker at Goldman Sachs Group Inc. (GS).

But by and large, most of the Fed folks seem out of touch with the financial markets. I’m sure they mean well, but many of these folks simply don’t have the investment cred.

Since the early 1960s, the Fed has launched a series of interest rate hikes nine times, not including the current rate-hike cycle; eight times, a recession soon followed.

Q: What do you think will happen in the energy market in 2023?

I believe energy prices, both oil and natural gas, are likely headed higher in the year ahead. That makes the recent pullback in energy a buying opportunity.

Energy supplies are tight globally, and the United States’ strategic petroleum reserve (SPR) must be refilled after the politically motivated drawdown in our crude oil stock this year.

Plus, with China attempting to reopen from its self-inflicted zero-Covid coma this year, demand for oil could spike even higher, as China is one of the biggest global importers. I’m bullish on the major oil and gas companies, especially Occidental Petroleum Corp. (OXY) and Schlumberger Ltd. (SLB).

Q: Are there any sectors that offer a lot of value investments?

Value investments can be found in several key sectors that I expect will perform very well in the year ahead, and energy looks to me like the strongest and most undervalued of the bunch.

The S&P 500 energy sector has the best combination of low valuation and high earnings growth expectations of any sector in 2023. Energy stocks are trading at just 8.5x expected 2023 profits. That’s well below the 20-year average of 13.9x. Plus, energy sector stocks are forecast to post 28.7% earnings growth over the next 12 months. That gives energy a spectacular PEG ratio of 0.30. The PEG ratio, one of Peter Lynch’s favorite metrics, consists of the price-to-earnings (P/E) ratio divided by growth rate, and lower is better.

Q: Will the importance of generating income from dividend stocks continue in 2023? — Dan S.

Another great question, and yes, Dan, generating income from dividends is always an important factor in your investment results.

Did you know that 84% of the total return of the S&P 500 Index since 1960 is attributed to reinvested dividends and compounding?

Just take a look at the chart below. 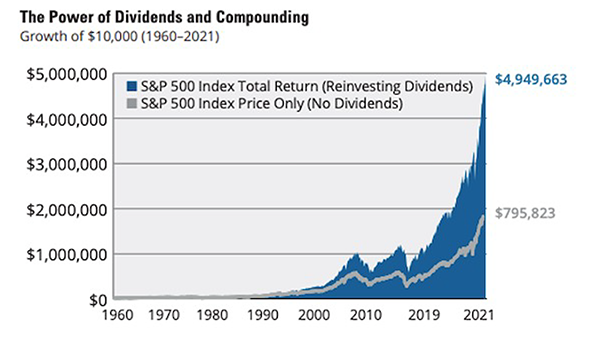 Source: Morningstar and Hartford Funds
I think we’ve all learned in recent years that the stock market moves in volatile and unexpected ways. That means you simply cannot count on rising stock prices alone to bail you out.

You’ve got to be proactive in making the market pay you.

And collecting dividends is a great way to go about it.

ONLY for a trade, not for a long-term investment.

Like stocks, bonds are oversold now after suffering one of the worst declines on record in 2022. And I expect that as the economy slows early this year, bonds could rally, perhaps sharply. But the days of near-zero interest rates are long gone.

I expect inflation will remain sticky for a lot longer than most folks think. That means we’re now in a new investing climate featuring higher inflation and higher interest rates going forward. High-quality dividend-paying stocks are most likely a safer bet than bonds in this climate.

Q: How do you feel silver miners will do in a stagflation environment against the backdrop of the U.S. dollar rising or falling? I would think that if rates decline, the dollar would decline as well and [precious] metals would move up, but I’m curious to hear your take. — John H.

The dollar may have peaked already. A big part of the reason why the dollar surged higher this year is that U.S. interest rates were higher than almost anywhere else in the world, and going higher, thanks to Fed rate hikes.

When a country raises its interest rates, those higher rates support that country’s currency because money flows in the direction of higher rates.

If the dollar declines more significantly in 2023, and I suspect it will, then gold, silver, and other commodities — plus commodity stocks — should be a great investment for next year.


Q: How do you feel about making investments in companies outside of the United States?

Yes, investing abroad is a smart move to make in 2023.

U.S. stocks have beaten international markets hands down in total return for many years now. But now that may be reversing, and as noted above, the dollar holds the key.

A higher dollar in 2022 hurt international markets, but a lower dollar in the year ahead could be a tailwind that boosts stock returns outside the U.S. stock and bond markets.

I’m especially bullish on European stocks that have attractive dividend yields — in many cases, yields that are much higher than those of your average S&P 500 company. Plus, European stocks are much cheaper than their U.S. counterparts. Stocks in Europe have a forward P/E ratio of just 11.2x, compared to 17.0x for U.S. stocks.

Emerging market stocks should also benefit from a declining dollar in the year ahead, and they are the most undervalued of all. In fact, the Emerging Market stock index trades at a forward P/E of just 10.1x, significantly cheaper than the S&P at 17x. Stocks in China, India, and other emerging markets have already been outperforming U.S. stocks in recent months, and that trend should continue.

Q: Is there any particular stock or sector you would stay away from in 2023?

Stay away from Tesla Inc. (TSLA).

It is the last of the high-growth, sky-high-valuation stocks that hasn’t really fallen apart yet. True, TSLA lost about 65% in 2022, but it’s still up 535% over the last five years.

So there are plenty of gains from the past few years that could be given back.

And the problem isn’t Elon Musk’s distraction with Twitter, although it certainly doesn’t help.

The 5 Biggest Investing Takeaways of January 2023

Behind the 39% Per Trade SSI Numbers