This year isn’t even one month old and the S&P 500 (SPX) has already dipped into correction territory, falling about 10% from record highs registered at the beginning of January.

That means bear market territory for the small caps and pretty darn close to a bear for tech. But take heart: As CNBC reported recently, at least somebody is making money amid this market sell-off. Who? Short sellers.

“Short sellers are reaping huge profits this year, as the stock market’s brutal bloodbath fuel[s] their bearish bets,” said CNBC. The story goes on to say short sellers have “gained $114 billion in January mark-to-market profits as of Friday’s close, up 11.6% for the year.”

A gain of 11.6% is a pretty darn good return for an entire year, and the shorts have earned it in less than a month.


The market slump is clearly due to the Federal Reserve’s about-face on inflation. The Fed has suddenly taken a hawkish stance, signaling tighter monetary policy this year and more rapid interest rate hikes ahead. But will the Fed follow through?

That remains to be seen. But I do expect this drama over inflation and higher interest rates is likely to keep playing out for some time. Get used to it.

Meanwhile, down in the concrete canyons of Wall Street, the pros are quickly turning bearish and getting caried away with the Fed’s newfound hawkishness.

Suddenly Wall Street is filled with Chicken Littles warning that the sky is falling. And from a contrarian point of view, that may be a good thing. But the remainder of 2022 is likely to be volatile for at least two reasons that have to do with stock market seasonality.

First, here’s an update on the so-called January Barometer. Recall the old Wall Street adage: As January goes, so goes the rest of the year. So far, January is not looking good, with just days remaining for stocks to play catch-up.

This is important because there is truth to this adage. The stock market’s yearly performance when January is up is much better than when January is down. Here are the stats for the S&P 500 since 1980, according to DataTrek research:


Second, from a bigger-picture seasonal perspective, 2022 is a midterm election year, with members of Congress up for reelection in November. Historically, stocks don’t tend to perform well in a midterm year, which typically sees large market drawdowns, as you can see below. 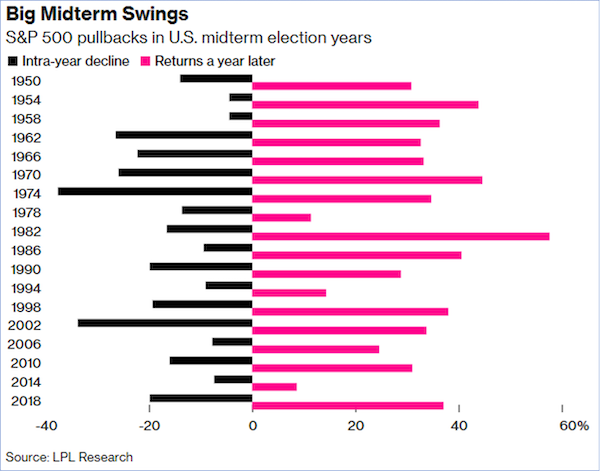 As you can see in the chart above, since 1950, stocks have experienced an average correction of 15% (black bars at left) at some point during the midterm election year.

The good news here is that stocks tend to rebound strongly the next year (pink bars at right). So at least this bodes well for a strong market rebound in 2023.

Still, despite these seasonal headwinds for stocks, it seems too early to write off 2022 just yet.

And remember, SPX has already fallen roughly 10% this year. So the bulk of the market correction may already be over at this point.

And for an added reality check, subscribers can keep tabs on the health of the market using the Market Outlook tool on TradeSmith Finance. As of yesterday, SPX has slipped into the Yellow Zone, but nearly 53% of its component stocks remain in the Green Zone in a healthy state.

Unless we see this indicator for the major stock indexes worsening, we should give stocks the benefit of the doubt to snap back from this correction.