On Feb. 7, 2014, the world’s third-largest cryptocurrency exchange announced it was halting all Bitcoin (BTC) withdrawals and triggered a sell-off that shaved 16% off the price of BTC by dinnertime that same day.

The entire exchange was defunct two weeks later after a leak revealed it had “lost” 744,408 bitcoins — representing about 7% of the entire Bitcoin supply.

That was the infamous Mt. Gox disaster of 2014, after which news organizations had a field day publishing eulogies for Bitcoin:


“We need to consider the distinct possibility that Bitcoin is dying… The big players didn’t get in, and now they won’t. Nobody wants to bet on a loser…”

Behind the scenes, big players were making their moves. (I’ll show you proof in just a moment.)

And as for Bitcoin being “the worst” investment of 2014 — wrong again. Indeed, mine exploded to a gain of better than 18,000% in the years following.

Now, eight years later, the market is reeling from another leading crypto exchange going down in flames — this time, FTX.

That move sent the FTT price spiraling (and other cryptos along with it), and shortly after, Binance CEO Changpeng Zhao (aka “CZ”) stepped in with a letter of intent to take over FTX.

Of course, that was all before CZ walked away from the deal not 24 hours later, and before FTX filed for bankruptcy on Friday.

Like with Mt. Gox, the fallout was quick: FTX announced it was halting customer withdrawals on Tuesday afternoon (Nov. 8), and by Wednesday, Bitcoin had tanked nearly 20% to its lowest price in two years.

Even before this most recent debacle, from the outside, the cryptocurrency market was looking positively dour.

Bitcoin is down 75% from its all-time high in 2021, market sentiment has plunged into “Extreme Fear” territory, and the doom-and-gloom “crypto bears” are trumpeting the message that the crypto party is over and done. 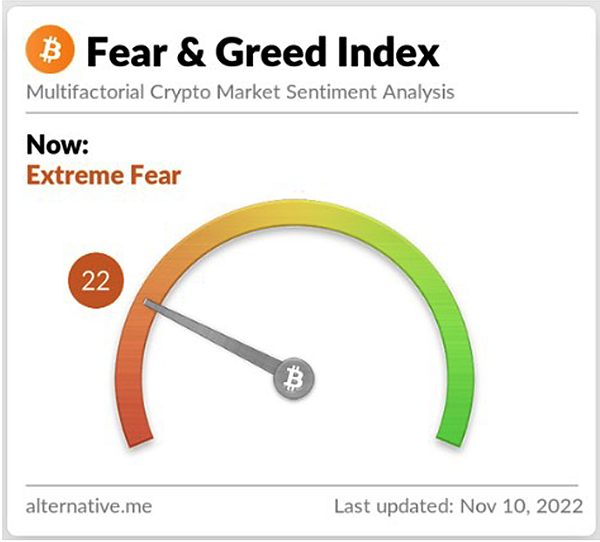 I have some simple advice.

Don’t fall for it.

And if you still believe that myth, you’re missing out on one of the greatest wealth opportunities of our lifetimes.

I don’t want that for you.

So today, I’m going to squash the “crypto is dead” myth once and for all…

As kids, we all heard our parents use that old idiom “do as I say, not as I do,” just when they were about to do something they knew was wrong.

In crypto, there’s enough hypocrisy to go around — but it’s more like, “watch what they do, not what they say.”

Because the same folks who are out there publicly slamming cryptocurrencies — the ones writing those Bitcoin eulogies you saw earlier — are actually the ones going “all in.”

In September, Dimon got up on stage during an Institute of International Finance (IIF) event and called crypto “decentralized Ponzis.” (That’s right — he used that same tired line from 2014.)

In reality, Dimon was gearing up for JPMorgan to make crypto history with the first live DeFi transaction on a public blockchain just two months later. (DeFi, or decentralized finance, is just a term that broadly describes a financial ecosystem that doesn’t rely on traditional institutions like banks.)

The trade, which was successfully executed on Nov. 2 through the Polygon (MATIC) network, was a massive milestone for crypto’s future development within traditional financial systems.

But this wasn’t the first time Dimon went in on crypto:

And that’s just scratching the surface.

Dimon might hate on crypto — but he’s smart enough to see the undeniable opportunity in blockchain technology. And he’s not about to pass up that up.

Or take fellow (former) crypto naysayer Mark Cuban, who infamously said in 2019 that he’d “rather have bananas than Bitcoin” and claimed that cryptos have “no intrinsic value.”

By 2021, Cuban had added Polygon to his company’s elite investment portfolio for one heck of an endorsement, even going so far as to call himself a crypto “evangelist” earlier this year.

It’s not just them. Massive global corporations have gone “all in” on crypto this year too:

And we’re just talking about developments that have rolled out since the summer.

See, the average person might think crypto is dead — it’s usually the first thing folks ask when they learn what I do for a living: “Isn’t crypto dead?” — but these big institutions and billionaires sure don’t think it is.

They’re placing their bets on crypto — and that matters. Because with institutional money behind it, crypto has become too big to fail.


What It Really Means When You Hear Crypto Is “Dead”

I started my own crypto journey just a few months after the Mt. Gox disaster in 2014.

During those eight years I’ve been a crypto player, Bitcoin has “died” 439 times, according to the Bitcoin Obituaries on 99Bitcoins.com, which tracks mainstream media stories that claim Bitcoin is worthless.

Yet, in that same time frame, some of my cryptocurrency investments went on to make me 20x, 30x, even 50x gains. Enough for me to achieve the financial freedom I was working toward and take my family on the world tour that’s brought us from Bali to St. Tropez to Paris to London, where I write to you now.

Because what everyone seems to forget once prices start dropping is that the market always corrects itself. It has before, and it will again.

The lesson here is that when everyone’s telling you crypto is dead, that means it’s a good time to buy.

And by sharing that wisdom with my clients, and the strategies I’ve learned, I’ve been able to make them five-, six-, even seven-figure returns from cryptocurrency investing.

I’m living proof that crypto is alive and well.

And that you can achieve your financial goals by investing wisely in it.

The Bank of Japan Disappoints and the Yen Shakes It Off, Telegraphing Hidden Strength

From Carrier Pigeons to Computers, ‘Big Money’ Always Had the Edge. Until Now.

Your Revenge on the ‘Big Money’ Can Start Today