In the Nov. 3 issue of TradeSmith Daily, I shared how analysts had been cutting their growth expectations for the S&P 500 in the third quarter and we were facing an earnings recession but had managed to avoid a full economic recession.

Fast forward to today, and the data I closely watch tells me that the odds have risen sharply for a recession in the next six months.

And since we’re already headed for a corporate earnings recession, as pointed out previously, an economic recession at the same time could be a bad combination.

In this TradeSmith Daily issue, I’m going to share not only what to watch but what to do.

The first place to start is by looking at the Federal Reserve’s own data, which confirms high odds of a recession in the year ahead. 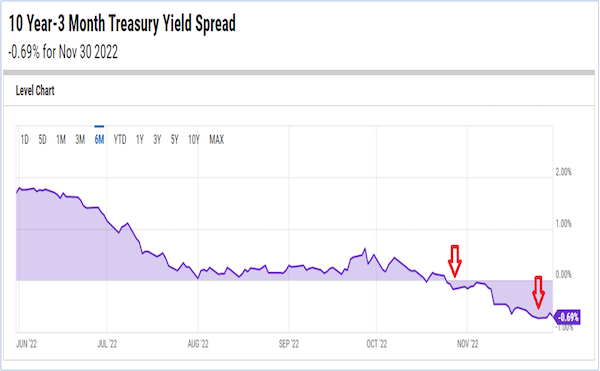 Source: YCharts
The chart above shows the 10-year to 3-month Treasury yield spread (10Y/3M). It’s simply the difference between the yield or interest rate on 10-year Treasury notes and 3-month Treasury bills.

A negative 10Y/3M spread has historically been viewed as an indicator of recession. In fact, the New York Federal Reserve Bank uses this particular spread in a model it uses to predict recessions.

Up until recently, the yield curve was positive, which means 10-year Treasuries yielded more than 3-month Treasuries, as they normally do.

But that changed just before Halloween.


Since Oct. 25, to be exact, the 10Y/3M yield curve has been consistently inverted. Short-term interest rates yield more than long-term rates.

In fact, it’s been getting more inverted by the day, hitting a low of -0.69 on Nov. 30. And that’s a big red flag as a recession indicator.

Editor’s Note: This page on the New York Fed’s website explains how they track and use this data to predict recessions.

Below is the NY Fed’s own version of the 10Y/3M yield curve. 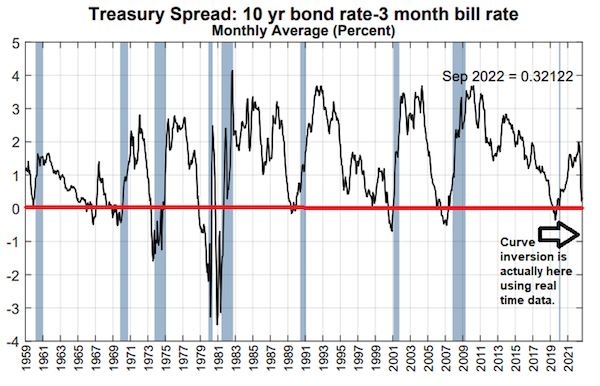 Sharp-eyed readers will notice that the 10Y/3M curve is not yet inverted (below the red horizontal line) in the chart above. That’s because, in classic Fed fashion, for some odd reason the NY Fed only updates the chart with a long lag time.

Even though another office at the Fed publishes this data daily in real time, the NY Fed’s October update has data only through the end of September, before the curve inverted. Go figure.

Here is the more important graph (alas, also out of date) that shows the NY Fed’s recession probability model based on the yield curve inversion above. 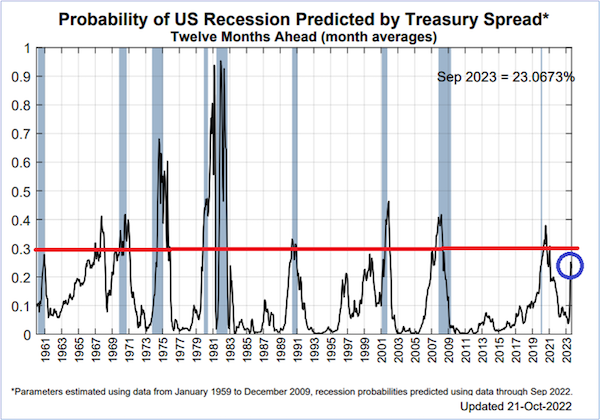 The blue circle shows where the indicator stood as of late October. That was likewise before the recent steeper 10Y/3M curve inversion.

And notice how every time the recession probability indicator crossed the red line, at roughly the 30% mark, a recession usually followed soon after.

The truth is, based on the real-time yield curve data, the NY Fed’s indicator would be well above the 30% level right now.

There were a couple of false positives historically. In 1967, the indicator spiked up to 40% with no immediate recession, although one did follow not long after in 1970.

But every other time the Fed’s recession probability indicator moved above 30%, a recession did follow soon after (on average, about six months later).

So, mark this on your calendar. The U.S. economy will most likely be in a recession by about April.


You have to savor the irony here. The Fed’s own data points to a high and climbing probability of recession. But rather than heeding that warning, the Fed keeps pushing interest rates higher just to make sure it’s a done deal.

Granted, Fed officials have said recently they plan to slow the pace of rate hikes. But that’s a far cry from going on hold, let alone cutting interest rates. And as the inverted yield curve shows, the damage may already be done.

So, I’m keeping a watchful eye on this indicator — that is, whenever the NY Fed gets around to updating it — along with other reliable indicators such as the monthly employment reports and the index of leading indicators.

But beyond just watching these signals, I have also laid out a road map of how to invest if we reach a period with high inflation and a drastically slowing economy.

This road map will serve as a crucial guide because I’ve seen this type of situation play out before, so I know what pockets of the market to put your money into.

I have all of that information here.