Mark Twain is credited with sharing the wisdom that history doesn’t repeat itself but often rhymes.

It’s a folksy way of saying that while history can’t literally reoccur, mistakes and issues in the present can put us in situations that are similar to ones that have happened in the past.

And to borrow from what Mr. Twain said, I believe this year’s stock market has rhymed an awful lot with the stock market of the 1970s.

Just think about it. When was the last time we dealt with these issues all at the same time?

And with the parallels between then and now as striking as they are, you’ve also got a possible road map for what lies ahead — not just for the next year or two, but the rest of the decade. If you’re too young to remember the ’70s stock market, here’s a picture that’s worth a thousand words. 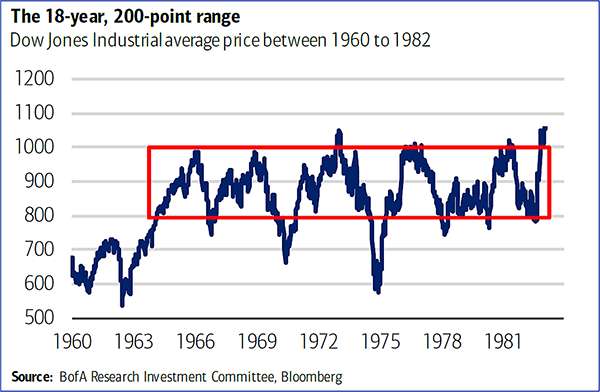 What we’re looking at is stagnation.

Not just in the economy, but in the stock market as well. The Dow Jones Industrial Average was stuck in a prolonged trading range for many years, going nowhere fast.

The Federal Reserve’s follies in fighting inflation during the ’70s are legendary. It rapidly hiked rates to rein in consumer prices, only to blink and just as quickly cut rates when the economy tanked.

Does that sound familiar?

As a result of its stop-and-go monetary policy, inflation proved sticky for many years from the 1970s into the 1980s.


Today’s Fed says it won’t repeat the same mistake, but you can go ahead and color me skeptical. Then, like now, stocks had been flying high for years. And stock market valuations got stretched to the upside.

Take the Nifty Fifty, a moniker for a group of stocks that were popular in the ’60s and ’70s.

They were also far overvalued when you look at the price-to-earnings (P/E) ratio, where a higher ratio means you are paying more for each dollar of earnings.

Of course, stocks in the Nifty Fifty crashed and burned in that ’70s stock market and were dead money for 10 years or more.

Some of them didn’t even survive.

In terms of “hot stocks” being overvalued in the past two years, you don’t have to look much further than Zoom Video Communications Inc. (ZM), Peloton Interactive Inc. (PTON), or almost anything in the ARK Innovation ETF (ARKK), which doesn’t have a single stock in our Green Zone.

The outcome of this replay of that ’70s market is likely to be a long series of rolling bear markets and large trading-range swings, but with sharply higher bull markets coming in between that you can take advantage of.

So here are two timely lessons learned from that ’70s market that you can apply to your own investing today.

At this point of the market cycle, value is likely to outperform growth.

Value stocks can be boring on the surface, which is why they haven’t received as much attention over the past decade as flashy tech stocks.

But there’s nothing boring about making money.

And in general, we can look to other challenging economic times to find how value stocks have outperformed growth stocks. 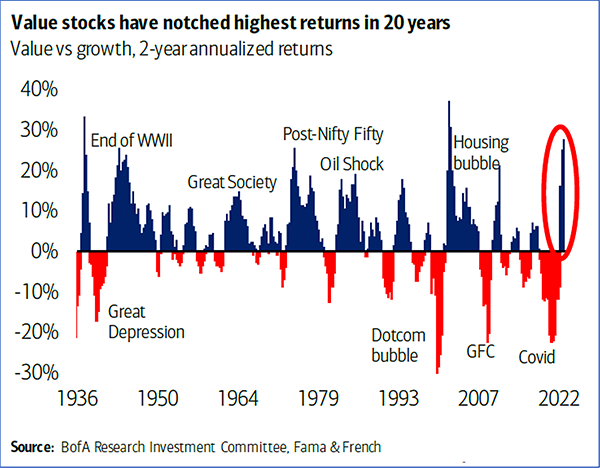 That ability to grow revenue, especially if we enter a stagnant environment, sends a jolt of excitement out into the world. More analysts start writing and talking about the company, and investors start scooping up shares, driving up volume and prices.

It’s very much a stock-picker’s (and a trader’s) market today, and that’s a good thing, especially if you’re reading each TradeSmith Daily that hits your inbox.

Companies with strong brands and pricing power will still thrive.

It doeesn’t matter if you’re a 70-year-old grandparent picking up your grandchild from kindergarten or you’re the kindergartner getting picked up — when both of you see the “golden arches,” you both start thinking about burgers, chicken nuggets, fries, and milkshakes.

That’s brand power, to have a logo implanting the urge to buy into your brain.

Now, imagine you’ve pulled into the drive-thru to order a combo meal and you notice that the prices have gone up, but you still order anyway. That’s pricing power. When a company’s costs go up, it can raise prices to account for those higher costs and pass them on to the customer. The key is always if the customer is willing to pay those higher prices.

In the case of McDonald’s, the answer from Q3 appears to be a solid “yes.”

Prices in the last quarter were about 10% higher compared to last year, but the company still reported a 6.1% increase in U.S. sales, and global sales increased 9.5%.

Net income did decline from $2.1 billion to $1.94 billion, but McDonald’s attributed some of that to the strength of the U.S. dollar against weakening global currencies.

Still, even with the currency issues, thanks to its pricing power, McDonald’s has been able to record net margins of 25% over the last 12 months, as seen in the image below.

Source: Macrotrends.net
According to the Corporate Finance Institute, 5% is considered low or poor, 10% is average, and 20% is good, so McDonald’s has exceeded “good” at 25%. Comparing the MCD stock price performance to the S&P 500, MCD is up more than 3%, while the S&P 500 is down nearly 22%.

Throw in McDonald’s 2.19% dividend yield on top of the stock price gains, and all things considered, you have a “soldier” that’s held up well and could perform even better for your “portfolio army.”

Other areas I would look for outperformers are the energy and basic material markets.

I recently wrote a two-part series in TradeSmith Daily on how we’re on the cusp of a commodity supercycle, with energy stocks in particular being a huge beneficiary of years of underinvestment.

You can catch up on Part 1 here, followed by Part 2 here.

In conclusion, there’s always a way to stay on the good side of a bad market, and I’ll be here to show you how to make that happen.