As an entrepreneur and software guy, I’ve always been fascinated with cryptocurrency.

Its real-world, tangible utility, which comes down to the blockchain technology that serves as its foundation, quite frankly blows me away.

Once a transaction is recorded on the blockchain, it can’t be refuted. No double-spending, no modifying the information, and no need for a third party.

I believe in this tech so much that as an investor, I bought a block of Bitcoin (BTC) about five years ago and vowed to add to that block over time… and never sell.

Fast forward to today, and cryptocurrencies are becoming an accepted form of payment that’s gaining mainstream momentum. The Dallas Mavericks NBA team accepts cryptocurrencies in exchange for tickets and merchandise, and that’s just one recent example.

Crypto is also viewed as a legitimate financial asset (I’ll have more on that at the end of this story), so much so that Fidelity now offers the option to include bitcoin in 401(k) retirement plans.

I’ve heard from many of you that you are interested in this sector but that you want to dip your toes into the crypto water before doing a full cannonball by owning cryptocurrency outright.

And while the best way to profit from cryptocurrencies is to own the assets themselves, there’s nothing wrong with taking advantage of ancillary opportunities.

You can still make a lot of money buying shares of a publicly-traded company that operates within the cryptocurrency sector. Plus, it’s an easy way to get started because you can use your current broker.

Running our scanners, I found just such an opportunity that recently triggered an Entry Signal.

Here’s everything you need to know.

A survey conducted by The Ascent found that Coinbase Global Inc. (COIN) was the most commonly used exchange by Americans to buy and sell cryptocurrencies, with 56% of respondents saying they had used Coinbase in 2022.

No other exchange came close. Only 27% of respondents said they had used Binance, the next biggest competitor.

Coinbase has become the go-to “on-ramp” for crypto investors because it’s based in the U.S., offers a user-friendly experience complete with educational resources, and has a relatively large list of coins available to buy.

The company generates the majority of its revenue from transactions, which is important to understand.

The fact that Coinbase makes money from people buying and selling crypto technically means it can make money in bull or bear markets because transaction fees are constant.

We’re in a down crypto market. There’s no question about it. And in reality, people may not be selling their crypto because they are long-term believers in the assets and hold onto them.

In fact, Coinbase shared in its July 2022 Monthly Outlook that on-chain data suggests those who hold onto bitcoin for six months or longer account for 77% of the total supply of BTC — and they don’t tend to sell during market volatility.

In its last quarter, $655 million of the $803 million Coinbase generated was from transactions.

That was a transaction revenue drop of 35% sequentially and 66% year-over-year.

But the crypto market goes through what Coinbase terms “peaks and troughs,” with the price of bitcoin used as the gauge for the overall state of the market.

Coinbase says there have been four major cycles since 2009, with the rise and fall of the price of BTC during these cycles lasting up to four years. The green line in the chart below represents when the price reached a peak, and the red line represents a trough. The price of bitcoin declined from that peak by 94% in Cycle 1, 85% in Cycle 2, 84% in Cycle 3, and thus far, 74% in Cycle 4. 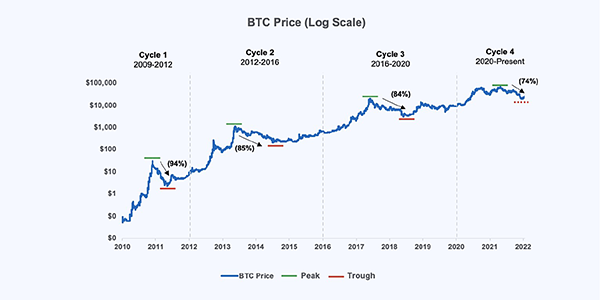 “During these down markets, we remain focused on building great products, while we typically see more casual competitors step back. Each crypto cycle has landed higher than the previous one, due to innovations built during the down turns,” the company said in its shareholder letter.

The company is working on boosting the value of its service now so that when the market does come roaring back, it can attract more new users and offer services that keep current members happy while increasing the amount of investing and trading they want to do on the platform.

Also, on Aug. 4, Coinbase announced a partnership with BlackRock Inc. (BLK), which is the largest asset manager in the world with $10 trillion under management. The partnership will allow Blackrock clients access to bitcoin trading services.

It’s just another validation for cryptos to be considered as assets when the largest asset manager in the world offers crypto trading services to its clients.

Of course, the crypto market is very fast-paced, and TradeSmith Senior Crypto Analyst Joe Shew says that you have to be comfortable with volatility if you’re going to make money in this space.

Our Volatility Quotient (VQ) tool says that Coinbase has a sky-high risk of 69.09%.

Be mindful of your risk tolerance before adding COIN to your portfolio.

But I want to highlight that an Entry Signal was triggered on Aug. 4 for COIN, placing it in our Green Zone.

For the “crypto curious,” I hope this helped by putting a potential profit opportunity on your radar.

And when you’re ready to take the next step, remember that we have our in-house specialist, Senior Crypto Analyst Joe Shew, ready to guide you.