There is a famous bit of dialogue from the 1967 movie “The Graduate,” which the American Film Institute ranks as the 17th-greatest film of all time:

In the late 1960s, the plastics industry looked promising. But what about today?

If an updated version of “The Graduate” were released in 2021, what single word would replace “plastics” in that well-known exchange?

We humbly submit the word “uranium.”

Uranium is the stuff of geopolitical bad dreams (think nuclear warhead build-up and tank-killing A-10 Warthog ammunition) and environmental disaster (Three Mile Island, Chernobyl, Fukushima, and so on).

Uranium is also the future. Why? Because, in the coming decade, the world will be forced to embrace nuclear power as a new 1980s-style arms race begins.

Widespread negative sentiment is important for establishing an environment of low prices, which in turn creates a value-investing component. The assets, and the valuations, should start cheap.

The next step for the perfect investing recipe might be a resurgence in demand — and not a temporary resurgence either, but one that lasts for years or even decades.

The recipe works even better if the new demand source is nonnegotiable — meaning there is no way to stop it or turn it off.

That set of conditions describes the uranium industry today. A new wave of demand for nuclear power (and thus uranium) is coming as the inevitable byproduct of a nuclear power renaissance — coupled with the unfortunate likelihood of a new nuclear arms race.

How an Oil War and ESG Sowed the Seeds

The seeds of the coming nuclear renaissance were actually sown in mid-2014, when the Saudis decided to initiate a new “oil war” in an effort to kill off U.S. shale producers.

The Saudis had last used the oil war playbook in 1986, the idea being to glut the market with so much cheap oil that higher-cost producers (like oil drillers in the United States) would go out of business.

The Saudis’ 2014 attempt didn’t really work. The oil price fell more than 70% over an 18-month period, but the U.S. shale industry largely survived on a river of low-cost financing. When a shale patch player went under, some new player with Wall Street funding would come in and buy the assets, and production would continue.

Still, investors were badly burned by their 2014-2016 oil patch experience, and ultimately decided the oil and gas industry was a lousy place for long-term capital investments.

In the aftermath of the oil war debacle, the concept of ESG, which stands for “Environmental, Social, and Governance,” became popular with money managers like BlackRock, a Wall Street giant with nearly $10 trillion in assets.

With ESG gaining prominence, long-term oil and gas projects became even harder to get funding for, and energy companies were encouraged to trim costs and cancel expansion budgets.

The more that investors saw the future as renewables-driven, not oil- and gas-driven — with ESG giving a moral sheen to the whole thing — the less willing Wall Street became to put money into, say, a new offshore oil rig that wouldn’t pay back its cost of capital until the 2030s (by which time oil might be dead).

The logic of starving the fossil fuel industry by withdrawing funding for long-term projects further hinged on the assumption that renewable power sources would take the place of dirty oil and gas.

It’s not that they are seeing a lack of attention or investment. Rather, it is more that a lack of investment in fossil fuel projects is leaving a giant gap in the world’s energy production footprint, so much so that renewables won’t be able to fill the gap in time to avoid painful shortages.

This is where nuclear power steps in. Modern designs for nuclear power plants are safer than ever before, while meeting the zero-emission criteria demanded by climate change advocates. Better still, nuclear power has the capacity to scale up in a major way; it can “fill the gap” in a way renewables can’t.

The anti-nuclear wing of the environmental sustainability movement won’t be happy about nuclear power’s return to prominence.

But the world has no other options. And China isn’t waiting around to convince anyone; it is moving ahead with transformative nuclear plans.

China is Making it Happen

In China, 150 new reactors are scheduled to be built. China needs them for energy security, especially with oil, gas, and coal running up against supply constraints.

And then you have the following, via the Financial Times:

Earlier this month, the Pentagon said it believes China has accelerated its nuclear plans and will quadruple its arsenal to at least 1,000 warheads by 2030.

Over the last two decades, China has stunned Washington with the relentless pace of its conventional military build-up, ranging from fighter jets and bombers to submarines and warships. Its navy is now by far the largest in the world.

But the combination of the hypersonic test and the warhead warning has now focused attention on a potentially dramatic shift taking place in Beijing’s nuclear posture.

China’s decision to embrace nuclear warheads will lead to a nuclear-armed Japan, a nuclear-armed Australia, and quite possibly a nuclear-armed South Korea. The United States will be fine with this, because the more countries that participate in containing China with their own nuclear deterrent forces, the better.

India, a neighbor of China that is already nuclear-armed, will also seek to bolster its arsenal as a response to China’s build-up — and Pakistan, a nuclear-armed sworn enemy of India, will then want its own build-up too.

Meanwhile, in the Middle East, Iran is moving back toward nuclear warhead capability — and the Saudis are watching Iran closely with the conviction that they will also need warheads.

All of this feels inevitable because, as we have said, China has already fired the starting gun.

Then, too, China won’t be the only country building nuclear reactors at a breakneck pace to deal with inevitable oil and gas supply shortfalls (as global demand increases but fossil fuel capital expenditure does not).

Emmanuel Macron, the president of France, has already verbally committed France to building new reactors — and the European Union on the whole is close to giving nuclear power an official environmental sustainability rating, which will allow the European Central Bank (ECB) to provide low-cost funding for new nuclear projects.

Given that Europe is now in the midst of an energy crisis created by natural gas shortfalls — with Russia flexing its grip as a supplier from hell — one can easily see how the rest of Europe could soon follow France’s lead.

What about the spot uranium price? Has it responded to these developments?

Yes it has, though the turnaround is still in its very early days. As you can see via the chart below, the spot uranium price has tripled from its 2016 lows — but could easily triple again in the coming years. 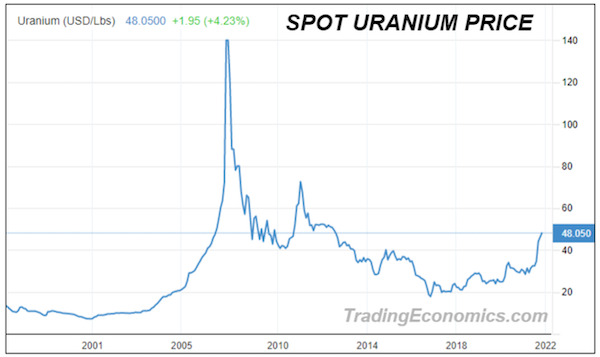 Returning to where we started, this whole line of thought could be reduced to a single five-line exchange:

“I just want to say one word to you. Just one word.”