When tech stocks were acting like money trees that would never have bare branches, Warren Buffett was criticized for sitting on hordes of cash and not making more investment moves.

But the tables have turned, and with tech stocks getting routed and uncertainty everywhere, everyone is obsessed with what the Oracle of Omaha is doing.

Just take a look at the headlines below: 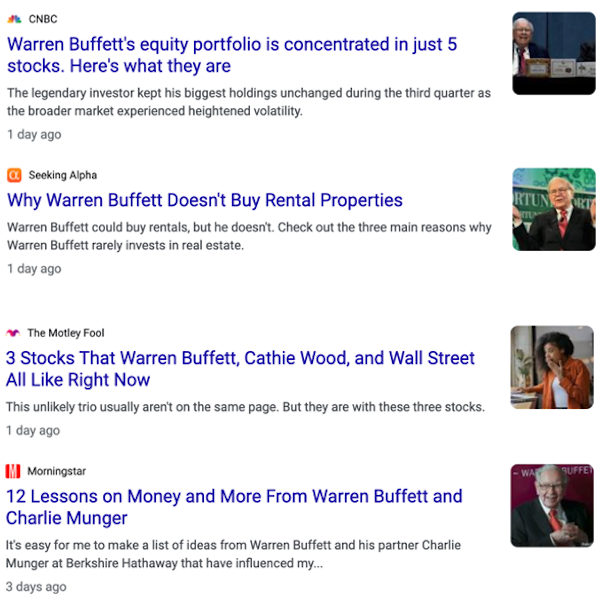 It makes sense that Buffett would receive increased attention, because who wouldn’t want to know what someone who has made a $99.9 billion fortune from value investing is doing during a time like this?

And while it’s normally unflattering to be called a copycat, there’s nothing unflattering about investing like Buffett’s Berkshire Hathaway Inc. (BRK.A) and giving yourself the potential to make a lot of money.

Here’s how you can play follow-the-leader with Berkshire’s recent moves.


2 Stocks That Will Let You Invest Like Berkshire Hathaway

When Berkshire revealed in a May 2016 regulatory filing that it had purchased $1 billion worth of Apple Inc. (AAPL) shares, it appeared that Buffett had broken his own rule and bought shares of a business he might not understand.

After all, it’s hard to imagine the Oracle of Omaha knowing the ins and outs of Apple when he reportedly bought a computer just to play bridge.

But as it turns out, it wasn’t Buffett who made this move, and that offered retail investors a signal of how to spot potential profit opportunities.

Here’s the backstory: Buffett and Berkshire Vice Chairman Charlie Munger are 92 and 98 years old, respectively, so they know they are closer to the end of their careers than the start.

Back in the early 2010s, they also knew they needed a succession plan, which is why they brought on Todd Combs and Ted Weschler.

Combs and Weschler are both former hedge fund managers, and they manage roughly 10% of Berkshire’s portfolio as of 2021.

Buffett shared that the 2016 purchase of Apple wasn’t made by him, but in fact by Combs or Weschler. He didn’t confirm which man made the investment but said that when smaller trades are made, either Combs or Weschler makes them, and they don’t need to consult him.

Since then, Berkshire has gone on to purchase more shares of AAPL, and in May 2022, Berkshire was sitting on $90 billion in profits from its stake in Apple. Now, while you can’t get a time machine to go back and follow Berkshire’s original investment in Apple, a new “buy” signal is flashing in another of Berkshire’s tech stock investments.

In October and November 2021, Berkshire purchased 14.66 million shares of Activision Blizzard Inc. (ATVI) at an average cost of about $77 per share, for a grand total of around $975 million.

Just a couple of months later, in January 2022, Microsoft Corp. (MSFT) announced plans to acquire Activision for roughly $68.7 billion at $95 per share.

According to Buffett, Berkshire had no knowledge of Microsoft’s acquisition plans at the time of its purchase, and, once again, either Combs or Weschler had made the purchase.

“In any event, the investment manager’s $77 per share purchase could have been replicated after the Microsoft proposal was announced at a price of $78 or so,” Buffett wrote in a letter sent to reporters in February 2022. “His purchase was no bonanza of any sort for him or Berkshire.”

ATVI is trading at $71.96 as of this writing. If the deal with Microsoft closes at $95 per share, that represents a 32% premium from the stock’s current price for anyone looking to follow Berkshire’s move into ATVI.

There’s no guarantee that the deal will close, as the acquisition is facing an antitrust probe, but with the bearish market conditions everyone is facing now, an opportunity to make a 32% profit is not something to overlook.

Part of Buffett’s investing philosophy is to be patient and wait for the right opportunity.

In his words, “the trick in investing is just to sit there and watch pitch after pitch go by and wait for the one right in your sweet spot. And if people are yelling, ‘Swing, you bum!,’ ignore them.”

As mentioned earlier, he’s been questioned for holding on to too much cash in the past:

But again, Buffett is fine waiting for those pitches to pass him by as he waits for one right in the sweet spot.

That’s when he deploys his cash and, as his net worth shows us, gets the last laugh.

And one stock Buffett is swinging away at is Occidental Petroleum Corp. (OXY).

What Buffett may like about the oil and natural gas industry is that it is still expected to have increased demand even as renewable energy sources become more popular, making it a long-term investment that fits into his ideal time frame for owning a company: forever.

Looking into the company’s financial operations reveals even more reasons for the Oracle of Omaha to like this investment. Buffett is famous for not paying Berkshire shareholders a dividend, but he loves shareholder-friendly moves, like dividend payments and stock buybacks, for his own investments.

After previously cutting its dividend payout to just one penny, OXY boosted its dividend to $0.13 per share in March, which now provides shareholders with a yield of 0.71%.

With more than 194 million shares, that adds up to $25 million in dividend payouts over the course of the year.

OXY also plans to repurchase $3 billion worth of shares by the end of this year.

That brought Berkshire’s total stake in OXY to 20.9%, and Berkshire has approval to purchase up to 50% of the company.

Putting OXY under the TradeSmith microscope, its investment risk is considered sky high, as it has a Volatility Quotient (VQ) of 55.33%, which is something risk-averse members should keep in mind.

But the stock is in our Health Indicator Green Zone, meaning it’s currently considered a “buy.”