Your “2022 Retirement Revolution” happens tonight at 8 p.m. Eastern. There’s still time to reserve your spot to learn the exact details about a unique financial strategy for earning as much as $3,400 per week — in a bear market — without buying or shorting stock. But hurry, you must click here to attend.
We spend one-third of our lives sleeping, but I sometimes feel as if I spend a comparable chunk of time traveling — flying to conferences, meetings, and staff events.

Even my vacations usually involve a trip to BWI Airport.

I’m accustomed to flight delays and a few unpleasant issues here and there, but some of the travel horror stories I’m hearing about are on a whole new level.

We’re seeing consistently overcrowded conditions, exhausted travelers being told their flights back home are delayed a second or third time, and folks in some cases waiting days to get their luggage back.

As awful as all this is to experience, oddly enough, it’s actually a “breadcrumb” that leads to a potential investing clue: it means airlines can’t keep up with demand, and more demand should mean more money generated.

We can use the US Global Jets ETF (JETS) as a broad visualization for the industry because its holdings include some of the most well-known airline companies. And this ETF shows us that airline stock prices have yet to fully recover from where they were trading before the pandemic.

So, with more demand in an industry whose beaten-down stock prices haven’t fully recovered since the pandemic, we might assume that there may be profit opportunities lurking within airline stocks.

At a glance, the news stories seem to support that assumption:

Of course, assumptions alone aren’t going to work when it comes to investing decisions.

Our tools dug beneath the surface and told the real story of what investors should be doing with this information.


What the TradeSmith Tools Tell Us about Airline Stocks

In terms of people wanting or being able to fly, airlines appear to be recovering.

This growing demand for travel was mentioned last week in a new feature for TradeSmith Daily entitled TradeSmith Snippets, and because of the tremendous response my team received from it, I wanted to make sure to follow up and cover even more companies in this industry (including a new company that’s in the Green Zone that I will tell you about in just a bit).

Now, while demand is increasing, there is still a growing list of issues the industry is facing in the near term.

Those issues include fuel costs, labor shortages, a looming recession, and new COVID-19 variants that could restrict travel.

Running the stocks we mentioned earlier through our Health Indicator and Volatility Quotient (VQ) systems, TradeSmith tools are saying that now is not the right time to bet on a recovery for airline stocks. The VQ values are as of the time of this writing and may have changed since.

This doesn’t mean that these stocks won’t eventually be buys, but at this moment, the opportunities aren’t ripe yet.

However, our tools uncovered one investment opportunity whose business greatly benefits from this flying frenzy. And no, it’s not an airline; rather, it’s the provider of a service that has proven indispensable to me on my many business trips.

When I’m able to connect to the internet on my flights, I never put much thought into what it takes to make that happen.

In North America, 85% of all broadband-connected business aviation aircraft use Gogo. Depending on how often you fly, you could buy monthly or yearly internet subscription plans for Delta Air Lines and Alaska Airlines.

For the crew, Gogo provides insights into flying activity and performance.

As you can see from the company’s September 2021 presentation, this is such a unique market that not only does Gogo dominate it, but there is even more market share to capture ahead as airlines that don’t currently offer internet connectivity will need to do so in order to keep up with the competition. 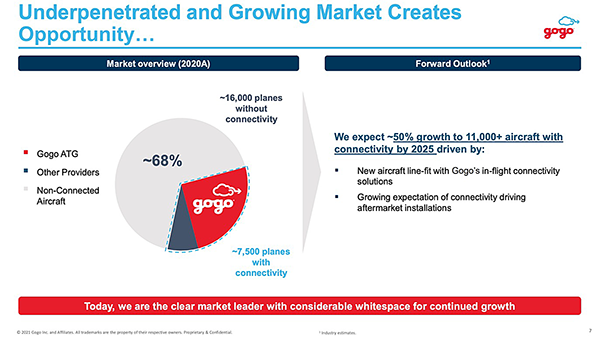 Source: Gogo September 2021 Presentation
In a time when it seems like all you’re hearing about is companies missing revenue expectations, Gogo recently updated its revenue projections because it expects to make more money than previously anticipated.

The management team is also putting a premium on increasing free cash flow, which is something I love to see. Not only does bringing in more cash after expenses act as a safety net heading into a potential recession, but it can also be used to increase shareholder value.

Gogo can use the money to make acquisitions, develop new products, reduce debt, or pay dividends.

Gogo Inc. does not currently pay a dividend, which if you were deducting points from an investment opportunity, it would lose a mark. Also, our system considers it to be very risky.

But with the moat it has created for itself by bringing the internet to the skies, its focus on increasing cash flow, and its current standing in the Green Zone, Gogo is an interesting opportunity that has been overlooked by other publications that are simply focused on the main players in the airline industry.

Mark Zuckerberg Is Worth $54.6 Billion in the Real World. Now He’s Building Virtual Worlds to Make Even More Money.

Welcome to the Start of the Commodity Supercycle (Part 2)