Conversations at family dinners, Wall Street luncheons, and policymakers’ meetings in Washington, D.C., all have one thing in common: Everyone is talking about the possibility of a recession. More than a few pundits on CNBC have suggested that we may already be in a recession now and just don’t know it.

The good news is, looking at the hard evidence myself, I would say those calls are premature. The bad news is, there are signposts pointing to higher odds of a recession ahead.

Let’s take a look at two of these signposts now to see where they stand. 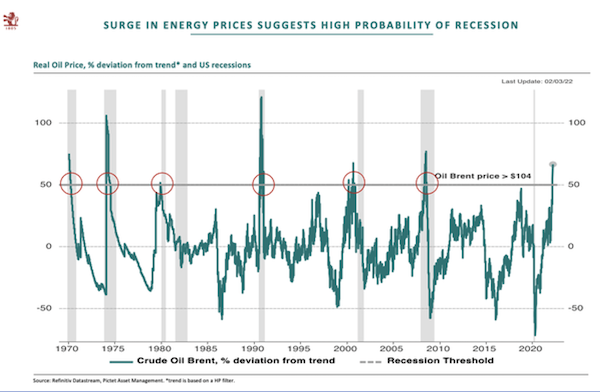 Oil prices, as you can see in the chart above, recently spiked higher by more than 50%. And the sheer magnitude of the jump in crude oil is both rare and troubling.


Over the past 50 years, big oil price spikes like this have been a very reliable indicator of an economic recession dead ahead.

That’s because for every penny increase in the price of a gallon of gas, it costs American consumers an extra $1 billion, according to Moody’s Analytics. When gas prices rise by $1 a gallon, as they have in the last year, that costs Americans $100 billion.

And oil isn’t the only commodity going through the roof right now. Prices for natural gas and coal are likewise skyrocketing. So are the prices for industrial metals and agricultural commodities.

Taken together, all these price increases trickle down to result in sharply higher costs for both consumers and businesses.

Those high costs eat into Americans’ disposable income. This can trigger a sharp decline in consumer spending, which is often a surefire catalyst for recession. For businesses, higher costs eat into corporate profits and can lead to less capital spending. Another common recession trigger.

However, the hit from higher energy costs may not be as dramatic for the U.S. economy today as it has been in the past.

The American energy industry has transformed itself in recent years and is now the world’s largest producer of oil and second-largest producer of natural gas. According to Moody’s via CNBC, higher energy prices today “would not be all negative, since the U.S. is now a large energy producer.”

So the rise in energy costs may not trigger a recession by itself, but it’s still a drag on our economy. The good news is that other indicators I’m watching are not yet indicating a rapid economic slowdown. 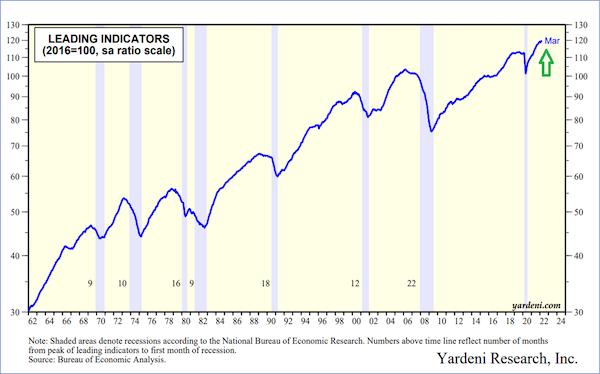 
Historically, the leading indicators have consistently peaked and rolled over prior to recession. That provides a handy early warning of trouble ahead for the economy.

But at the far right of the chart (green arrow), you can see that the latest readings show a still-expanding U.S. economy. In fact, lead time from a peak in the leading indicators to the start of recession averages more than one year.

So if a recession was imminent, as some of the talking heads on CNBC claim, then it should be showing up by now in the leading indicators, but it’s not. This data is updated every month, however, so keep a watchful eye on the trend of the leading indicators as I do, because it can be a potential sign of trouble to come.