In volatile markets like we have right now, it’s critical to own the right stocks at the right time.

With the SPX down 17.5% this year, there are plenty of bargain stocks to choose from. But you’ve got to be certain you are choosing the right ones: stocks that can not only survive but thrive in this environment of accelerating inflation and an uncertain economy.

To illustrate this point, I have the perfect example.

I recently had a conversation with a colleague about Kroger Corp. (KR), the giant supermarket chain.

KR is America’s largest grocery store chain, with more than 2,700 stores nationwide and yearly sales of more than $137 billion.

My co-worker wanted to know my thoughts on it, as it’s a conservative, dividend-paying, blue-chip stock that has performed very well in a difficult market.

KR shares are in the Health Indicator Green Zone according to our system, with a Bullish rating.

KR pays you a 1.6% dividend yield as you’re waiting for the shares to move higher in price, and the stock is up 19% year to date, while the S&P 500 is down nearly the same amount.


There is no doubt that KR is a quality company with an A-credit rating. It’s also a recession-resistant company, which is a great attribute with so many market commentators using the word “recession” these days.

After all, even if the economy does head south, we still have to eat. This is all true, but KR would still not be a top pick for me right now. 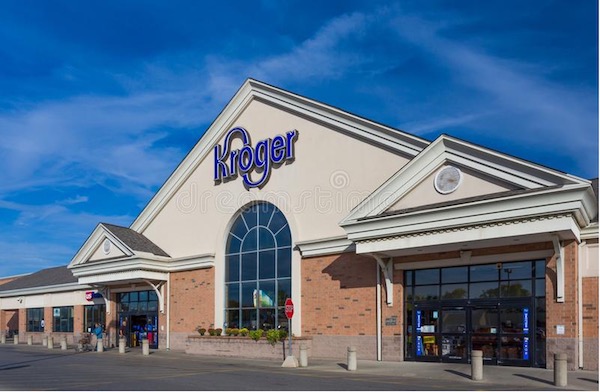 While KR is certainly a recession-resistant blue chip capable of surviving an economic downturn, it is not very well positioned to survive the highest inflation we’ve experienced in more than 40 years, let alone thrive in such a rising cost environment. And it could be hurt by higher interest rates, too.

Prices for everything, including meat, dairy, poultry, and even beer, are going through the roof. And KR sells all that stuff, so can’t it just raise prices?

KR doesn’t raise its own chickens, and last time I checked, it doesn’t brew its own beer. It has to pay suppliers for all the groceries it sells. And those prices are going up, squeezing KR profit margins in the process.

Sure, KR can pass along some of those price increases, but not as much as you think. That’s because it’s in a brutally competitive business.

Competitors like Walmart Inc. (WMT), Whole Foods (AMZN), and plenty of smaller grocery store chains and upstart fresh markets are fiercely competing for every shopper. On top of that, folks are a lot more price-conscious these days due to higher inflation, and they will go where they find the best deals.

Just a quick glance at some key items on KR’s income statement and balance sheet will tell you all you need to know about just how vulnerable KR is to inflation and rising interest rates.

KR posted sales of $137.9 billion last year. But the company keeps only a tiny fraction of that, just $3.7 billion in operating income. Its operating profit is just 2.7% of sales, which means there’s not much left over after KR pays for all the merchandise it sells and all other operating expenses.

But it gets even worse.

The company’s net profit margin — what’s left over after it pays for all corporate expenses — is just 1.2%. And even that low margin has been steadily falling over the past several years. This company has extremely narrow profit margins, which means no real pricing power, so inflation could be a huge threat to KR.

Second, owning a chain of grocery stores is a capital-intensive business. Just think about all those 2,700 stores across the country. KR has to pay $845 million in rent every year and has another $6.4 billion of lease liabilities. Plus, it has a huge electricity bill every month to keep all those store lights on and all that meat, milk, and beer cold.

And how about its massive labor costs…

All those butchers and bakers, the clerks who stock the shelves, and the folks who check you out at the register and bag your groceries. KR has a lot of mouths to feed (not just its customers). It currently has 465,000 employees on the payroll and its labor costs are going up.

Look, we’re in a tight labor market today, with many more job openings than workers available to fill them. That’s why average hourly earnings are surging higher at a 6.6% annual clip over the past year.

Add up all its costs and you’ll see KR shelled out $134.4 billion in total operating expenses last year alone. Not a lot left to reinvest in the business, let alone pay shareholders dividends or buy back stock.


Third, KR, like most capital-intensive businesses, is deep in debt, to the tune of about $21 billion in long-term debt, lease obligations, and other liabilities. Meanwhile, its total shareholders’ equity amounts to just $9.5 billion.

In other words, the banks and bondholders own far more of this company than KR common stockholders do. And for my money, that’s not a healthy financial position to be in with interest rates on the rise.

As the company’s debts come due in the years ahead, it’ll have no choice but to pay them off out of cash flow or refinance at higher rates, squeezing already razor-thin profit margins even more. KR shells out more than half a billion dollars a year in interest expense already, and that sum is likely to go up a lot in the years to come.

For all these reasons, I’ll pass on KR shares right now. Kroger may be recession-resistant, but it is certainly not inflation-resistant — quite the opposite.

While I focused on Kroger in this report, there are two key ways to see if any company is inflation resistant.

Too much debt and not enough equity can get a business into financial trouble as interest rates rise.

Bottom Line: While KR is certainly a blue-chip stock with a lot of positive attributes, I think it may struggle with inflation surging higher. I would look for better alternatives in the consumer defensive sector. And in my next report, I’ll show you one candidate that can likely better handle inflation.

In the meantime, let me know if you’ve been creating your own watchlist of stocks that can handle economic downturns. Do you have other companies you’d like me to look at to see if they are recession-resistant and inflation-resistant? I’d love to hear from you, so let me know.