Inside, our team will cover these topics:

Snippet No. 1 Preview: There’s a good chance you have at least one product from Colgate-Palmolive Co. (CL) in your kitchen or bathroom right now. It’s the maker of cleaning and personal care brands such as Colgate, Palmolive, Speed Stick, Irish Spring, Ajax, Tom’s of Maine, and more. But an activist just took a $1 billion stake in the company, and he didn’t do that because he likes its toothpaste and body wash; he believes the company’s pet food business is trapped under the Colgate umbrella and that if spun off, it could be a $20 billion business on its own.

Snippet No. 2 Preview: Kroger Co. (KR) is the second-largest grocer in the United States behind Walmart Inc. (WMT). But Kroger is eyeing the No. 1 spot, making an acquisition offer for Albertsons Companies Inc. (ACI), the fourth-largest U.S. grocer. If regulators approve, it would give the two companies a total of 5,000 stores. On the surface, this might seem like an appealing defensive play, as people are still going to buy groceries even if we’re in a recession. But we’ll go deeper to see whether this stock is worth your hard-earned money.

Snippet No. 3 Preview: Tesla Inc. (TSLA) released its earnings after the closing bell on Oct. 19, with shares sinking more than 5% after the company missed revenue expectations. We’ll look into that more closely, as well as whether our Health Indicator suggests that TSLA is a buy, hold, or sell.


Snippet No. 1: The $20 Billion Pet Food Business Hiding Inside a Toothpaste Company

Most known for toothpaste, Colgate also has a pet food business through Hill’s Pet Nutrition, which offers prescription food and food for “every stage of a healthy pet’s life.”

Source: Hillspet.com
Colgate’s pet-nutrition division brought in $909 million in Q2 2022, a 5.3% increase from the previous year.

Colgate is also building a new food manufacturing facility in Kansas, and it completed the acquisition of a canned pet food facility in Italy in April.

Loeb believes that if the pet food business were spun off from Colgate, it would have a valuation of $20 billion.

A study from Deloitte and Edge Consulting Group found that between 2000 and 2014, spinoff stocks generated a 22% return within the first 12 months of trading.

That’s even better than the 14% return of the parent company that performed the spinoff. It’s also important to keep in mind that the dot-com bubble and Great Recession both took place between 2000 and 2014, so even in tough conditions, spinoff stocks have generally performed well during their first year of trading.

If Colgate were to follow Loeb’s advice and spin off the pet division, the data shows it could be a profit opportunity.

But running it through our Health Indicator, Colgate is currently a stock to stay away from, as it entered our Red Zone on Sept. 30.

It also has a Relative Strength Index (RSI) reading of 41.39, with 70 considered overbought and 30 considered oversold, providing an additional proof point that there currently isn’t a case for investing in Colgate as of this writing.

We will still be following how this all plays out closely.

In the meantime, there’s a company in our Green Zone with a confirmed stock spinoff that you can find out about here.

Snippet No. 2: Kroger: Buy One Business, Get One Step Closer to Market Dominance

Kroger, the second-largest U.S. grocer by market share, has agreed to acquire Albertsons for $34.10 per share at a deal valued at $24.6 billion.

Albertsons is the fourth-largest U.S. grocer, giving Kroger more firepower to compete with Walmart, the top dog in the grocery business.

Combined, Kroger and Albertsons would have 5,000 stores and more than 700,000 employees. The boards of both companies have approved the takeover, but the deal still needs regulatory approval, which is expected to take some time.

One of the sticking points for regulators will be whether Kroger and Albertsons have too much market share in certain states and areas of the country.

Kroger may be recession-resistant, but with razor-thin margins, an expected 20% increase in worker turnover this year from pre-pandemic levels, and supply chain issues that keep persisting, it’s not an inflation-resistant business nor a good investment to make, as it’s in our Red Zone.

Instead, with Senior Analyst Mike Burnick predicting in May that high inflation is here to stay for the foreseeable future, a better company to look into is one like Constellation Brands Inc. (STZ), a producer of beer, wine, and spirits.

It is currently in our Yellow Zone, meaning our Health Indicator says it wouldn’t be a buy as of this moment, but it’s an example of a company that has pricing power to handle high inflation.

If ingredient and bottling costs go up, Constellation can still pass those costs on to consumers and create higher margins on its products because people are willing to pay more for their drink of choice.

For example, Constellation’s gross profit margin (what the company made after paying expenses) in the latest 12 months is 52.3%.

In comparison, Kroger’s gross profit margin in the latest 12 months is 22.3%.

And as you can see in the slide below from Constellation’s July investor presentation, it has a lot of fans who will be willing to absorb higher costs because they don’t want to switch brands. 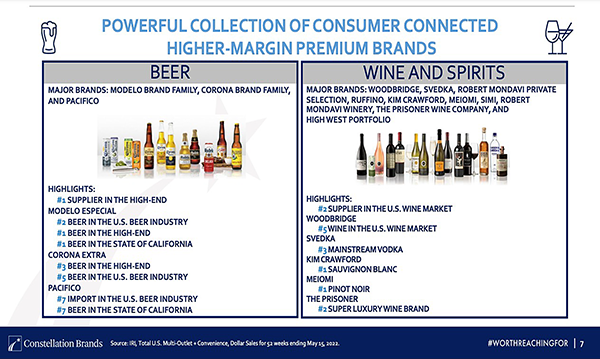 STZ has also made shareholder-friendly moves, repurchasing $500 million worth of its own stock back in April and paying out a dividend with a yield of 2.47%.

Tesla’s shares dropped more than 5% after it missed revenue expectations in its most recent quarter.

Tesla reported revenue of $21.45 billion, not far below expectations of $22.09 billion, but it was enough to send the stock price lower.

The company said it has faced headwinds of inefficiencies at its German manufacturing plant, a strong dollar impacting sales abroad, and an increase in raw material costs.

Tesla also announced an uptick in vehicles produced and delivered compared to the last quarter.

Tesla is currently in our Yellow Zone, meaning you may want to wait for an Entry Signal before acquiring shares.

But that doesn’t mean there aren’t other opportunities with electric vehicles (EVs). EVs reached a “tipping point” in July, as they composed 5% of new car sales in the United States.

For electric vehicles, the 5% threshold appears to be the point in time when early adopters will soon be overtaken by mainstream demand.

And while there will be profit opportunities that unfold by owning individual EV makers, we also shared how to think bigger about the space and the investable opportunities currently out there.

In our Oct. 19 issue of TradeSmith Daily, we zeroed in on two Green Zone stocks that will power the widespread use of EVs across the country.