You wouldn’t want to take home just 5% of your salary.

Or eat only 5% of your dinner.

But in July, when electric vehicles (EVs) accounted for 5% of new car sales in the United States, that’s a massively important percentage for investors — a Bloomberg report said it’s the signal that we’re now headed toward mass adoption of EVs. 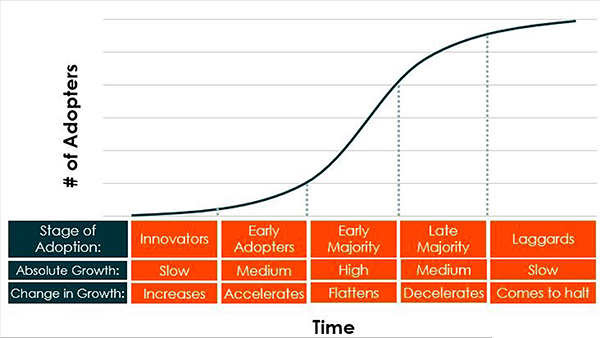 Source: GlobalXETFs
For electric vehicles, the 5% threshold appears to be the point in time when early adopters will soon be overtaken by mainstream demand.

This faster adoption will be thanks to more public charging stations, less expensive cars, and buyers being more educated, which is all accelerating much faster than most people anticipated.

In today’s issue of TradeSmith Daily, we’re looking beyond investing in individual electric vehicle makers and zeroing in on the companies that will power the widespread use of EVs across the country.


EV Investments Not Named Tesla, No. 1: ON Semiconductor Corp. (ON) Quick Facts

The Company in Action

On Semiconductor designs image processors and vision sensors that are used in advanced driver-assist systems (ADAS). These systems do exactly what their name suggests: They help the driver safely operate the vehicle, providing features such as adaptive cruise control and lane-departure warnings.

The technology really is amazing: In the presentation slide below, onsemi shows how its sensor identifies long-distance objects 100 times better than the human eye, whether it’s a clear day or a dark night. 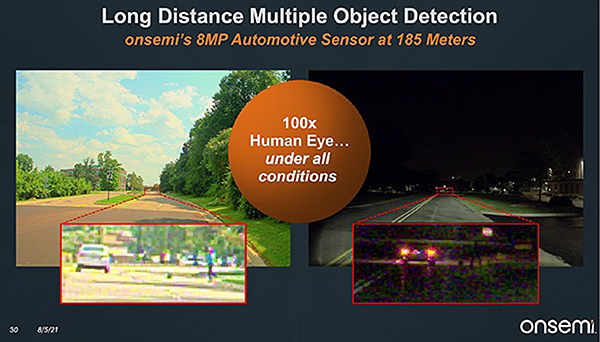 There’s a growing demand for semiconductors made from silicon carbide, as they can provide up to 50% faster charging and up to 10% longer driving ranges for electric vehicles.

Customers are obviously going to be more eager to own a car with faster charging and longer driving ranges, and that demand could help silicon carbide chip revenue from electric vehicles reach $14.4 billion by 2030, up 1,066% from an estimated total of $1.2 billion in 2022.

And as you may have guessed by now, ON is a beneficiary of that increased demand.

On Aug. 11, onsemi cut the ribbon on its newest silicon carbide production facility in Hudson, New Hampshire, an important development to ensure that it can keep up with demand.

In addition, onsemi expanded its operations in the Czech Republic, constructing a building that will allow it to increase production capacity by 16 times. It has invested $150 million into this building and will spend an additional $300 million through 2023.

With silicon carbide chip revenue expected to be 12 times larger by 2030, those investments into expanding production should be money well spent for onsemi.

Our TradeSmith tools reveal that ON is considered a high-risk stock, with a Volatility Quotient (VQ) of 44.67%, but our Health Indicator has it in the Green Zone, which means it is currently considered a “buy.”

The Company in Action

EVgo has made it simple to charge electric vehicles right from your phone.

Drivers can simply find an EVgo charging station, plug in their car, and tap “Start Charging” within the EVgo app. For those who don’t want to use the app, most stations offer the option to use a credit card for a small fee.

If you’re away from your car when it’s finished charging, you’ll receive a mobile alert.

And with a growing number of electric vehicles on the road comes the need of charging those vehicles.

EVgo, Pilot Co., and General Motors Co. (GM) have partnered up to help make that happen. Each company is seeking public funding to build out a network of direct-current fast chargers, which can get a battery to an 80% charge in 30 minutes.

Pilot Co., one of the largest gas and diesel fueling companies in the country, with over 750 locations, will host direct-current chargers at up to 500 of its locations. Pilot is also renovating hundreds of stores to offer Wi-Fi, lounges, and food options, which will be convenient for those waiting for their cars to charge.

Meanwhile, GM is investing $6.6 billion in EV plants, and the partnership will afford special benefits to drivers of GM’s electric vehicles. Folks with GM cars will be able to reserve chargers in advance.

The equipment will be engineered and operated by EVgo.

What’s impressive with EVgo is its ability to build beneficial relationships with companies that carry a lot of big-name recognition, and those relationships can lead to even more partnerships; if one company sees a competitor forming a relationship with EVgo, it won’t want to be left behind.

For example, outside of the partnership with Pilot Co. and GM, EVgo works with Uber to allow its drivers to charge their vehicles at a discount. EVgo is also partnering with Kroger Co. (KR), Whole Foods Markets, Sheetz, and Wawa to host charging stations at their locations.

EVgo has been in our Green Zone since Aug. 24, but it is considered to have sky-high risk with a VQ of 70.03%, making it a stock that risk-averse investors may want to stay away from.