When we first launched Buy This, Not That in TradeSmith Daily, many of you wrote in to say that you not only found this feature helpful, but you wanted to see it continue.

And what made helping our members even more rewarding was to see how so many of you felt Buy This, Not That was like “teaching you how to fish” rather than “giving you a fish.”

Because that is true empowerment in investing: learning something new to help develop your decision-making process, then executing what you learned to reap the rewards.

In regard to the new feature, Tom B. said, “This is a useful communication. I like following your logic even more than the actual recommendation.”

Thank you for the kind words, Tom, and I am happy to say that Buy This, Not That will be a regular feature in TradeSmith Daily.

For this edition, my sights are set on the semiconductor industry.

Currently, only about 10% of the world’s semiconductors are made in the United States, while East Asia boasts 75% of global chip production. And semiconductors are such a vital component of the electronics that we purchase that the industry is expected to grow in value from $573.44 billion in 2022 to $1.38 trillion by 2029.

To become a central hub of semiconductor production, the United States CHIPS and Science Act was signed into law on Aug. 9, and it will provide $52 billion to increase the domestic production of semiconductors.

That brings me to two semiconductor stocks that will battle it out in this edition of Buy This, Not That: ON Semiconductor Corp. (ON) and Micron Technology Inc. (MU).

Both can benefit from the cash infusion coming to the U.S. semiconductor industry, but our Health Indicator says that only one is worth buying as of this writing.


BUY THIS: Flipping the Moneymaking Switch ON

ON Semiconductor Corp. (ON), also known as onsemi, is a chip supplier that fuels emerging technologies like industrial workplace automation, energy infrastructure, 5G and cloud connectivity, and autonomous and electric vehicles (EVs).

CEO Hassane El-Khoury and CFO Thad Trent have a track record of success in this business, with El-Khoury previously serving as the CEO of Cypress Semiconductor Corp. and Trent operating as his CFO.

During Trent’s tenure as CFO, Cypress’ revenue increased from $723 million to $2.5 billion, and Cypress went on to be acquired for $10 billion. The duo has already shown they know not only how to navigate this industry, but also how to increase revenue and make a company so valuable that it receives an acquisition offer worth billions.

Something else I like about this company is that it features slides about creating shareholder value in its investor presentation instead of just giving shareholders lip service. 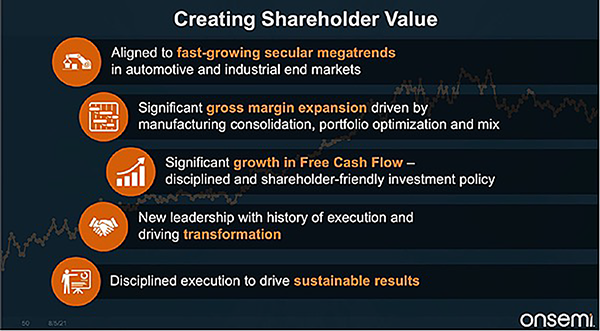 Source: Onsemi Investor Presentation August 2021
In terms of the company’s operations, with autonomous vehicles being a popular topic in the investing world, that’s the segment onsemi serves that I am going to focus on today.

The global autonomous vehicle market was valued at $94.43 billion in 2021 and is expected to reach $1.80 trillion by 2030. Those vehicles will need the type of technology onsemi designs to be able to function safely without humans behind the wheel.

The company designs image processors and vision sensors that are used in advanced driver-assist systems (ADAS). These systems do exactly what their name suggests: They help the driver safely operate the vehicle, providing features such as adaptive cruise control and lane-departure warnings.

The technology really is amazing: In the presentation slide below, onsemi shows how its sensor identifies long-distance objects 100 times better than the human eye, whether it’s a clear day or a dark night.

Silicon carbide is crucial for enabling efficiency in EVs, EV charging, and energy infrastructure, and this new facility will help ensure that onsemi can match supply with demand.

The SiC total addressable market is projected to grow from $2.1 billion in value in 2021 to $6.5 billion by 2026, so onsemi keeps positioning itself for the money to keep rolling in.


NOT THAT: The Memory Maker

Micron Technology Inc. (MU) produces computer memory chips that are used for a wide range of purposes, including:

Piper Sandler analyst Harsh Kumar believes that Micron could grab $10.3 billion in funding from the CHIPS Act, which sounds great at face value.

But it’s important to dig into Micron’s fundamentals a little more — and to run the company through our tools — to get the full picture of what’s going on.

The market for memory chips is cyclical, and Micron has been feeling the impact of that, experiencing six consecutive quarters of year-over-year (YoY) revenue declines from 2019 to 2020.

After that, revenue rose for nine consecutive quarters, but that revenue growth may be coming to an end.

In the company’s most recent earnings call, Micron said that it expects it will need to curb supply to match softer demand in PCs and smartphones, as well as to account for continuing supply chain issues. Less product to sell would lead to less revenue, and that could be the beginning of another cyclical decline in sales from previous years.

Looking at ON and MU in TradeSmith Finance, we can see that both companies have high-risk Volatility Quotients (VQ), but high volatility is to be expected for companies in the tech sector.

But when we look at the Health Indicator, we see that ON is clearly in the Green Zone and MU is in the Red Zone, meaning our system is saying ON is a “buy” and MU is a “sell.”

Because the semiconductor industry is expected to more than double in value within the next few years, we’ll keep monitoring it closely for profit opportunities.