When I needed to buy a new pair of workout shoes, my preferred shopping experience would be spending 20 minutes on Amazon.com (AMZN), finding a pair I like, and having it arrive on my doorstep two days later.

That’s what I prefer instead of paying an arm and a leg on gas to drive to the outlet mall, circle for a good spot, fight to get the attention of the understaffed retail employees, and hope that the store has what I’m looking for.

My wife suggested we make the trip to the outlet mall so that I could try the shoes on first and maybe find a great deal.

Against my better judgment, I agreed, but she had to bribe me with brunch.

Still, I had to devise a plan before I went — get in and out of the Nike Inc. (NKE) factory outlet as fast as my old shoes would carry me.

Not only did I find a great pair of shoes, but they were HALF OFF the regular price.

What’s funny is that just days later, Nike reported disappointing quarterly financial results and the stock dropped 7% to an almost two-year low. The reason was shrinking profit margins due to bloated inventories.

In other words, too many shoes in stock.

I at least did my part with my purchase by reducing Nike’s inventory levels.

But in all seriousness, this issue of too much inventory is happening across the country, and it’s gained the short-term attention of investors.

Even Target Corp. (TGT) is reportedly giving refunds to customers without asking them to return the purchased merchandise.

Consumer demand bounced back much stronger than anyone expected after the early days of the pandemic. So, companies caught off guard over-ordered inventory. But as consumption returned to normal levels, companies started to realize that they have too much stuff on hand.

It will take time, but this is something that can be fixed.

For example, Target projects that its margins will improve in the second half of the year as the inventory issues work themselves out.

What’s going to be a more important issue for how a stock performs is inflation.

Look, inflation is, by far, the biggest problem stocks have been dealing with all year. So, it makes sense that any easing of inflation pressures would be bullish for the market.

And there is good reason to believe that’s already underway now. 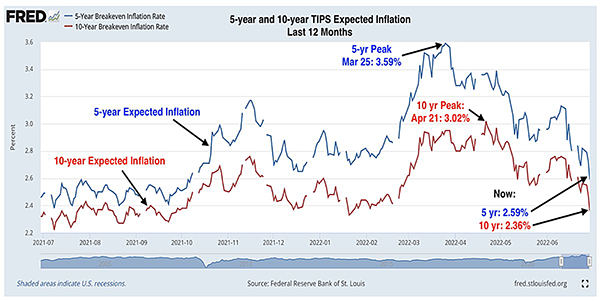 Shown above are inflation expectations based on the yield for five- and 10-year TIPS (Treasury Inflation-Protected Securities).

The yield or interest paid on these securities is adjusted for inflation. So, today’s yield on TIPS that mature in five years is a real-time measure of inflation expectations five years from now.

As you can see, the five-year TIPS peaked in March at 3.59% and have been on a steady downtrend since then. The recent low yield of 2.59% is down one full percentage point in just three months. Also, take a closer look at inflation itself.

Sure, the “headline” rate of inflation, measured by the consumer price index (CPI), remains at multi-decade highs at 8.6%. But, take a closer look at the rate of change in monthly inflation readings shown in the chart below. 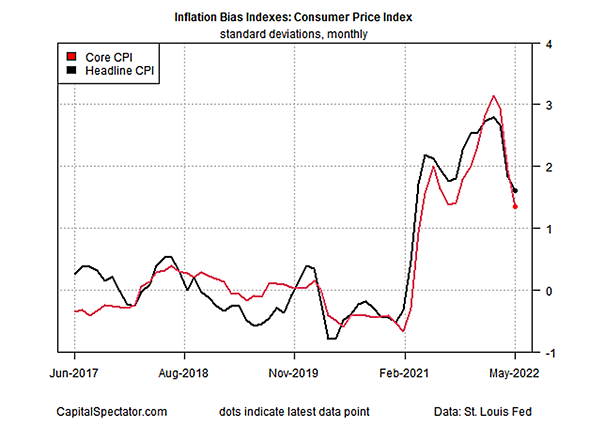 The reason why this is happening is that the Federal Reserve has slammed the brakes on money supply growth in the U.S. economy.

Runaway growth in the U.S. money supply during the pandemic, and for too long afterward, is what triggered accelerating inflation in the first place.

The Fed’s measure of M2 money supply (which includes cash, checking deposits, and easily-convertible near money) grew at a breakneck pace. As an example, M2 supply growth was 6.73% in December 2019 but reached 26.89% in January 2021.

But now the Fed is reining in all that easy money printing.


What to Expect Next

Don’t get me wrong. This process takes time. You’re talking about a $20 trillion U.S. economy, with trillions more in easy money that was sloshing around but is now being drained by the Fed.

Inflation won’t vanish overnight, but it appears to have finally peaked. You will likely start to notice the ebb tide of inflation in the “official” CPI and PPI numbers during the second half of this year.

First, the headline and/or “core” rate of inflation will get somewhat less bad.

After all, inflation began to noticeably spike higher in late 2021. That’s because the monthly rate of inflation at that time was going up against very easy comparisons compared to 2020, when the pandemic caused disinflation.

And that means the upside in the rate of inflation is likely to ease. Slowly at first, but ease, nonetheless.

Then the numbers will begin falling short of economists’ consensus estimates by a wider margin. At that point, the financial media will finally catch on to what is happening. And CNBC will tell you inflation has peaked.

Of course, stock prices could already be significantly higher by that time. That’s because this is a forward-looking market, and the smart money is already starting to sniff out that inflation is easing.

Once inflation begins to ease, the members of the Fed should quickly change their tune about higher rates.

And that would be a big bonus for the stock market.