For my birthday in May, I had a bit of a tug-of-war with my family on what we should do.

They wanted to go out somewhere, but I was content with staying in and watching the premiere of “Stranger Things” season four together on Netflix.

We could have gone to the movies and seen “Top Gun: Maverick,” but I wasn’t enticed by the idea of circling the parking lot for an empty spot, spending $15 on a bag of popcorn and a drink just for myself, and hoping the person sitting behind me wouldn’t keep up a lively conversation with their neighbor the entire time.

And recent Gallup poll numbers seem to indicate that other folks are deciding that the moviegoing experience isn’t worth it. In 2007, people between the ages of 30 and 49 saw 4.5 movies in theaters a year. In 2021, that number was 1.4, a decline of nearly 70%.

Some of that decline has been exacerbated by COVID-19, but the number of tickets being sold has been on a downward trend for more than a decade. 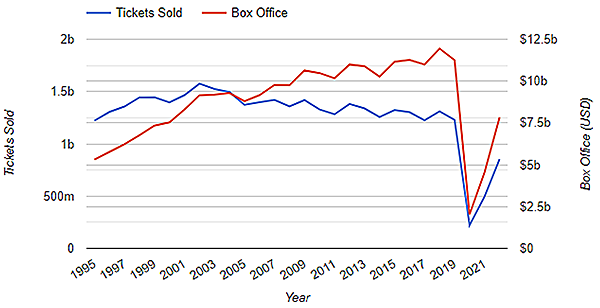 Source: TheNumbers.com
One of the biggest names in the movie theater business is AMC Entertainment Holdings Inc. (AMC), whose bottom line has been bludgeoned by this decline in moviegoers.

Free cash flow was also a negative $134.8 million for the company, so after paying off operating expenses and capital expenditures, AMC doesn’t have money left over to pay down debt.

Understanding the bleakness of the situation, CEO Adam Aron decided to sell preferred shares of his movie company.

The preferred shares (listed under the ticker symbol APE, a nod to meme-stock investors) are a new class of shares that were given to AMC shareholders as a dividend, and those shares did not require a vote from shareholders to be issued. The company’s board has authorized 1 billion shares to be issued, and has issued 516.8 million in August.


What to Make of AMC as an Investment

Back in 2008, Warren Buffett wrote, “Price is what you pay; value is what you get.” And though AMC shareholders are paying the price, the value simply isn’t there.

What they are receiving is a debt-saddled company that is trying to find workarounds to raise money and investing in things that add no fundamental value to its business (like a $27.9 million stake in Hycroft Mining Holdings [HYMC], a gold miner that is beleaguered by its own heavy debt load and also experienced a near brush with bankruptcy).

Our Heath Indicators place AMC in the Yellow Zone, and with a Volatility Quotient (VQ) of 95%, it almost maxes out at being one of the riskiest investments you can make.

You’re bound to keep seeing AMC in the news, and there are going to be times when the stock price skyrockets for no reason outside of the meme trading army pushing the price higher.

If you feel a pang of FOMO (fear of missing out) when that happens, remember what Buffett said about price and value, and remember that now is the time to stand up and be a real investor.

You don’t just invest in stocks; you invest in the businesses behind them.

And if you follow these five other tips, you’re taking full control of your financial success.

Energy Costs Could Be 17% Higher This Winter. Here’s One Investment to Make Before That Happens.

How I Made $2 Million in the Stock Market