November brings a change in the color of leaves, pumpkin pie… 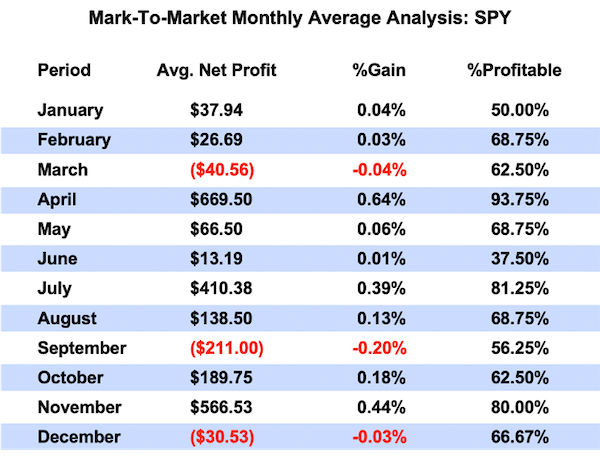 True, I could just go out and buy the SPY index ETF.

But I want to show you how to get a bit more bang for your buck.

I want to start by debunking the notion that fundamental analysis and seasonality are mutually exclusive.

Seasonality is any repeatable pattern that occurs every year, such as months, quarters, seasons, and even holidays.

Fundamental analysis assumes that a market’s function is to price the value of a company, making seasonality irrelevant unless it directly impacts the company’s business — like heating oil for energy companies in the winter.

We can see this demonstrated in something called the “January effect.”

The January effect was first discovered in 1942 by investment banker Sidney Wachtel, who found that stock returns were five times higher than average in January from 1904 to 1974. Another study by investment bank Salomon Smith Barney found an average January outperformance of small caps versus large caps of 0.82% from 1972 to 2002.

The theory is that investors sell off poor-performing stocks at the end of the year to lock in a capital loss for the year, reducing their tax liability.

Currently, we see that this type of selling pressure on the last trading day of each month causes the markets to close lower more often than is typical.

So, when looking at market seasonality, how do we know we’re not looking at some random pattern? We can’t always know the reason behind something. But we can use a bit of common sense.

What do I mean?

We may not know exactly why November works so well for stocks, but we can see from historical data that there is a connection between some specific months and performance.

Now let’s dig into how to take advantage of this.

First and foremost, if I’m going to take advantage of what I know about seasonality and investing in November, I want to do that in the healthiest sector out there.

The quickest way for me to find that is through TradeSmith Finance’s sector health dashboard.

This scorecard tells me three important pieces of information:

Using this as my starting point, I can see that Energy, Financials, and Real Estate come out on top. Let’s use Financials as an example here.

We know the Federal Reserve plans to taper asset purchases and will likely raise rates sometime next year.

That bodes well for banks because banks borrow money using short-term interest rates and lend to consumers at longer-term rates.

The difference between the two is known as the net interest margin.

So we know that November is a strong month for investing in general and we can also see that financials might be a strong and reasonable opportunity within that trend.

In fact, the Financial Select Sector SPDR Fund ETF (XLF) finished December higher than it opened 73% of the time over the last 20 years. XLF has been in the TradeSmith Finance Green Zone and in an uptrend for more than 11 months. It carries medium risk with a VQ of 20.19% and has a Bullish rating within our system.

November is One of Many

We’re already nearly halfway through the month of November, so don’t worry if you’ve missed the majority of this particular opportunity.

As the table at the beginning showed, there are several other months with statistical abnormalities that provide delicious opportunities.

On Monday, I’ll show you how to dig even deeper with TradeSmith Finance’s screener tools and signals to see how they can help you prepare for your next investment.

In the meantime, what has been your best or worst month so far this year? Does it fit with the seasonality statistics I shared? I’d love to hear your feedback — and any questions you have for me. I can’t always reply personally to every email, but I do read them!