CPI data, Fed rate hikes, and odds of a recession — these stories are dominating the financial news headlines.

They keep you informed, but hearing that the consumer price index (CPI) rose 0.4% in September doesn’t do you a lot of good on its own for making investing decisions.

What is worth your time is knowing what stocks the most successful investors in the world are buying and selling and seeing what our tools and systems have to say about them.

Because when a billionaire investor like Warren Buffett hears the word “recession,” he doesn’t stick his head in the sand and wait for things to get better — he goes on a shopping spree.

From 2008 to 2011, Buffett invested in companies like Mars, Goldman Sachs Group Inc. (GS) and Bank of America Corp. (BAC) — giant, blue-chip companies that he knew had strong business fundamentals that could weather the economic storm and, eventually, emerge stronger than before.

With patience on his side, Buffett was rewarded.

Today, in Billionaire Snapshots, we’re looking at one of the latest moves Buffett has made in the face of an economic downturn.

We’ll also check out what our tools are saying about the stock. But first, we also want to share a bit of Buffett’s background so that all our TradeSmith Daily readers have a fundamental understanding of what shaped him and his investing strategy.

That way, you can apply what Buffett has learned to your own investing process.

He was only 11 when he made his first investment, buying three shares of Cities Service preferred stock at $38 per share. Even then, Buffett’s “buy and hold” philosophy of investing was taking shape: He hung on as the stock suffered a harrowing drop to $27, then sold his shares once they reached $40, booking a modest profit.

As Buffett put it in a 2019 letter to Berkshire Hathaway shareholders, “I had become a capitalist, and it felt good.”

Buffett continued to follow that good feeling throughout his youth, earning money by delivering newspapers, washing cars, and partnering with a friend to run a pinball machine business that he ended up selling for more than $1,000.

He supplemented his practical experience by reading books about investing, and at 19, Buffett stumbled upon a book that would define his approach to investing: “The Intelligent Investor,” by Benjamin Graham.

In the book, Graham outlined the tenets of value investing, the practice of seeking out and buying undervalued stocks — a strategy that would become the foundation of Buffett’s success.

After receiving degrees from the University of Nebraska and the Columbia Business School (where Graham was his professor), working as an analyst for Graham’s investment firm, and running an investment firm of his own, Buffett turned his attention to Berkshire Hathaway, a textile manufacturer.

The struggling company’s cheap share price appealed to Buffett, and by 1969 he had scooped enough shares to have a controlling stake and transform it into the investing conglomerate it is today. Buffett knows who he is as an investor, always focusing on a value approach, and it’s an understatement to say it has served him well.

Part of Buffett’s investing philosophy is to be patient and wait for the right opportunity.

In his words, “the trick in investing is just to sit there and watch pitch after pitch go by and wait for the one right in your sweet spot. And if people are yelling, ‘Swing, you bum!,’ ignore them.”

He’s been questioned for holding on to too much cash in the past:


But again, Buffett is fine waiting for those pitches to pass him by as he waits for one right in the sweet spot.

That’s when he deploys his cash and, as his net worth shows us, gets the last laugh.

And one stock Buffett is swinging away at is Occidental Petroleum Corp. (OXY).

What Buffett may like about the oil and natural gas industry is that it is still expected to have increased demand even as renewable energy sources become more popular, making it a long-term investment that fits into his ideal time frame for owning a company: forever. 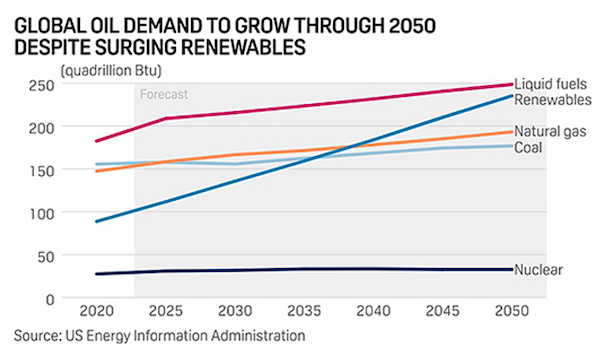 Looking into the company’s financial operations reveals even more reasons for the Oracle of Omaha to like this investment. Buffett is famous for not paying Berkshire shareholders a dividend, but he loves shareholder-friendly moves, like dividend payments and stock buybacks, for his own investments.

After previously cutting its dividend payout to just one penny, OXY boosted its dividend to $0.13 per share in March, which now provides shareholders with a yield of 0.77%.

With more than 194 million shares, that adds up to $25 million in dividend payouts over the course of the year.

OXY also plans to repurchase $3 billion worth of shares by the end of this year.

That brought Berkshire’s total stake in OXY to 20.9%, and Berkshire has approval to purchase up to 50% of the company.

Putting OXY under the TradeSmith microscope, its investment risk is considered sky high, as it has a Volatility Quotient (VQ) of 55.56%, which is something risk-averse members should keep in mind.

But the stock is in our Health Indicator Green Zone, meaning it’s currently considered a “buy.”

OXY also fits into Senior Analyst Mike Burnick’s belief that we’re entering a “commodity supercycle” and that will benefit energy, particularly oil and natural gas, as it’s been a sector underinvested in for years.

You can access Part 1 of Mike’s free report here.

And you can access Part 2 of Mike’s free report here.