Winter is coming, in the form of higher utility bills — the average cost of heating a home is expected to be $1,200, which is a 17.2% climb from last year.

Part of the reason for the expected higher prices is the gas and oil bans that the European Union (EU) has placed on Russia in an effort to decrease its ability to fund its war against Ukraine.

Russia supplied a quarter of the EU’s oil and 40% of its natural gas in 2021, and the EU announced in March 2022 that it will cut gas imports from Russia by two-thirds within a year.

In response, the United States has sent record liquefied natural gas exports to Europe to ease its reliance on Russian energy.

On top of that, the U.S. Energy Information Administration (EIA) expects U.S. natural gas consumption this year to increase by 4% from 2021, but it also listed that U.S. natural gas inventories at the end of August were 12% below the five-year average.

This means that supply and demand may be out of whack by the time winter rolls around, which will be a problem for the nearly half of U.S. households that heat their homes with natural gas.

Now, we’re not just sharing this to give you a head start on saving up for your winter bills.

Our team will go beyond the news and show you possible investments to take advantage of the premium prices for energy.

While there are very few pure-play natural gas stocks, one investment area to think about is natural gas transportation. There’s a bit of a moat for gas and oil transportation and storage companies, as it’s a dangerous business that requires specialty knowledge and equipment.

And that specialty led us to a Green Zone stock that is paying out a dividend yield of 8.73%.

With 120,000 miles of energy infrastructure across 41 states, Energy Transfer moves 30% of the nation’s crude oil and natural gas through its pipelines. It has diversified revenue sources within the energy sector, allowing it to set up fee-based contracts for consistent revenue. 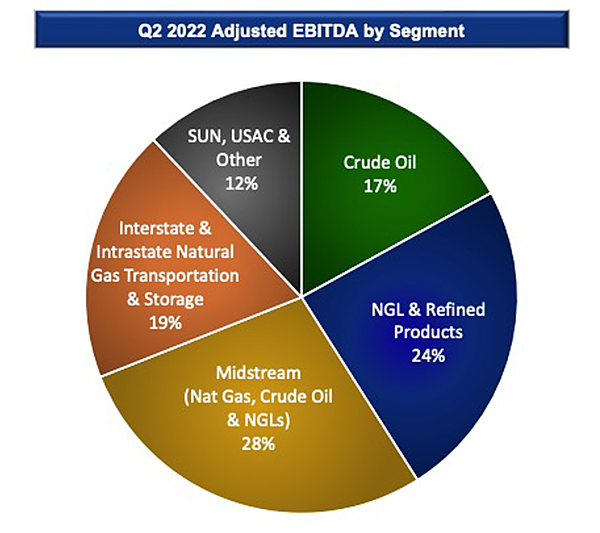 But in terms of natural gas, a lack of demand shouldn’t be an issue. The global natural gas distribution market is expected to increase in value by nearly $300 billion between 2020 and 2025, which will be a boon for ET.

Something also worth mentioning is the conviction the management team has in its company, and members show that conviction by investing their own money.

Roughly 13% of the stock is owned by company insiders, while industry peers have roughly 2% insider ownership. 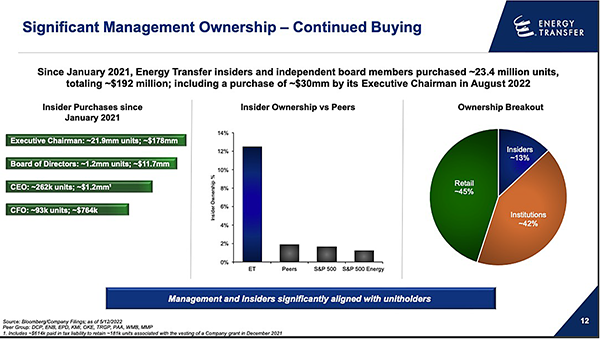 Source: Energy Transfer Investor Presentation September 2022
Executive Chairman Kelcy Warren bought $36 million worth of ET in August, and while there are a lot of reasons to sell a stock, there is only one reason to buy a stock — you think it is going to make you money.


Putting ET under the microscope, we can see that it is considered a high-risk investment, with a Volatility Quotient of 35.26%.

But it also has some significant positives:

This is also a company that will benefit from the “commodity supercycle” that Senior Analyst Mike Burnick believes we are entering.

He anticipates that renewable energy will become more prominent in the years ahead but that widespread adoption will take longer than expected.

He believes this will create an energy supply shock of historic proportions, which can lead to price gains across the board for companies with oil and natural gas operations, especially considering that natural gas has been referred to as a “transition fuel” because it has fewer polluting effects than traditional fossil fuels.

You can find Part 1 of Mike’s commodity supercycle prediction story here, and Part 2 is available here.

The biggest gains will always be made through owning individual stocks, but for anyone who likes to limit their risk as much as possible, ETFs can fit into a risk-averse investor’s portfolio.

An ETF is a basket of securities, which means its price isn’t connected to the stock performance of just one company. Although there may be less money to make than there would be in owning an individual stock, there are still profits to be made, and ETFs tend to drop less in price than individual stocks in a market downturn.

Its top five holdings include:

FCG is currently in our Yellow Zone, but we still wanted to put it on your radar as an opportunity if you would rather invest in an ETF than an individual stock.

Examining FCG’s holdings may also give you some investment ideas if you’re looking for individual energy stocks.