The debate continues to rage about whether or not the U.S. economy will fall into a recession in 2023 — that is, if we’re not already in one now.

But evidence for a recession continues to mount, as I explained in a recent TradeSmith Daily issue.

We have sharply higher interest rates this year, which has led to a prolonged inversion of the Treasury yield curve. That has been a very reliable indicator of recessions in the past.

Plus, the leading indicators, which I keep a watchful eye on, have now declined enough to push the odds of recession to a high level.

As you can see above, the year-over-year percentage change in the Leading Economic Index (blue line) is falling deeper into negative territory. Similar levels have signaled an oncoming recession in the past. But the question is, what do investors do with this information?

If your knee-jerk answer is “sell stocks,” you had better think twice.

The reality is, the faster a recession becomes “official,” the sooner stocks will bottom and provide a great buying opportunity.


Historically, stocks have almost always bottomed during a recession, not after it’s over. The average recession lasts less than one year; only 3 out of the 11 recessions since 1950 have lasted longer. But if you wait for the “all’s clear” signal that a recession is over before buying stocks, you will likely miss out on substantial gains.

During the 11 recessions since 1950, the S&P 500 hit bottom an average of five and a half months after the recession started. And the average maximum drawdown for the S&P was 21%. In fact, about half the time, the stock market went back above breakeven by the time the recession was declared over.

Folks, judging by the Leading Economic Index, we may already be in a recession now. And if this turns out to be an “average” recession, the bottom for stocks may already be IN at this point: At the October low, the S&P was down more than 25%.

If that’s the case, then the key to success is figuring out what’s next for stocks and, more important, which stocks are the best buys right now.

Smaller companies tend to be more sensitive to changes in the economy, so their stocks often get hit hardest as the odds of a recession increase, as they have this year. Sure enough, the iShares Russell 2000 Index ETF (IWM), which tracks small caps, is down 22% year-to-date, more than the S&P 500 large-cap index.

But the good news is, small-cap stocks also tend to bounce back first and outperform the S&P 500 and the overall market by a wide margin, as you can see below. 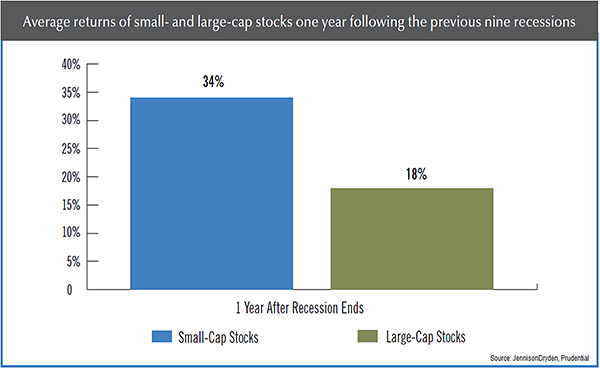 In fact, following every recession since 1950, small-cap stocks have given investors nearly double the returns of large-cap stocks, posting average gains of 34% in the year after the recession ends.

So, it may be a great idea to seek out small-cap exposure in your portfolio right now. But all small caps are not created equal.


After a recession ends, it is usually the more cyclical sectors that perform best in the following stock market rally. Cyclical sectors include financials, consumer discretionary, and energy.

If you’re not already invested in energy, one easy way to find opportunities is by searching our TradeSmith database for individual small-cap energy stocks that are in our Health Indicator Green Zone.

An even easier way to get small-cap energy exposure in a single trade is through the Invesco S&P SmallCap Energy ETF (PSCE). The fund holds 27 small-cap energy stocks found in the S&P SmallCap 600 Index. Plus, this ETF has a forward P/E ratio of just 4.9, meaning it’s a much better value than large-cap energy. It has been in the TradeSmith Green Zone for more than two months.

For my money, small-cap energy stocks may just be one of the best places to put your money in 2023.

A Big Prediction for ‘Small’ Stocks