When a company plans a spinoff, most people view it as a news event.

The team at TradeSmith is here to show you that it’s an investing clue.

Deloitte and Edge Consulting Group found that between 2000 and 2014, spinoff stocks generated a 22% return in the first 12 months of trading. That’s even better than the 14% return of the parent company that performed the spinoff.

Last week, I presented the opportunity of the Kellogg Co. (K) spinoff, and there’s another company performing a spinoff that I want to put on your radar this week: General Electric Co. (GE).

Another bragging point for GE was that in September 1993, it was the most valuable publicly traded company.

But in the early 2000s, less-efficient business units and bad bets started to take their toll on the company — and on investor’s confidence. From 2000 to 2018, GE shares shed 7% a year.

But that’s where GE has been.

We’re looking at where it is headed, because that’s where profit opportunities can be found.

GE is spinning off into three distinct companies: 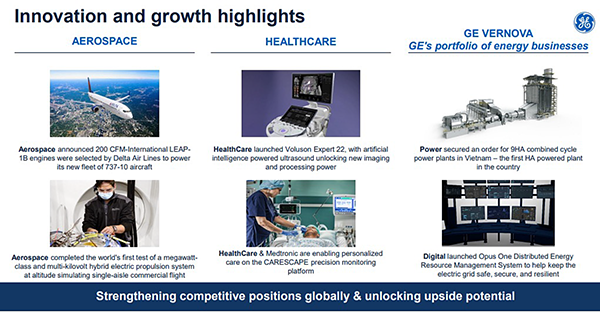 Source: GE Q2 2022 Presentation
The aviation division makes jet engines and integrated systems for military, commercial, and general aircraft operators, with one of its customers being Boeing Co. (BA).

As you can imagine, with fewer flights and less traveling because of COVID-19, the aerospace division has been suffering from a loss in sales.

However, we have pointed to the recent growing demand for airline travel, and aerospace companies’ financial results are expected to return to pre-pandemic levels by 2024.

If the recovery is sustained, GE Aerospace could be valued at up to $85 billion, according to a report from Barron’s. The projected value of GE’s aerospace division alone is almost as much as the current market cap of the entire company.

At Least You Have Your Health

Like the aerospace division, the health care unit has suffered a loss in sales since COVID-19. With people only visiting hospitals for emergencies and using more telemedicine options, hospitals had less of a need for some of GE’s products.

But once GE HealthCare is spun off, being more focused would allow it to make more strategic acquisitions, boosting revenue.

Instead of trying to organically create growth, GE HealthCare executives can go out and buy growth.

Projections suggest that the health care unit could be worth between $50 billion and $60 billion.

This will be the first company to be spun off, and it has the most amount of information about the spinoff currently available.

GE HealthCare is expected to trade on the Nasdaq under the ticker GEHC in early 2023.

GE shareholders as of a certain record date will be entitled to receive shares of GE HealthCare, and the number of GE common stock shares that a shareholder owns will not change.

The final company from the spinoff will be GE Vernova, whose name is a combination of the Spanish “verde” for “green” and the Latin “novus” for “new.”

The company has a portfolio of energy operations that includes onshore and offshore wind turbines, electrical distribution grids, hydropower, and the storage of renewable energy.

Of the three companies that will emerge after the spinoff, this is the least established, but there is an increasing demand for alternative energy.

With all three businesses running on their own, and taking into account debt, other liabilities, and assets, projections suggest the market cap of all three companies combined could be between $130 billion and $140 billion.

That would be more than double GE’s current value.


What Our System Says About GE

Former GE CEO Jack Welch once said, “Change, before you have to.”

GE didn’t follow that advice, but having to change through the spinoff could allow the company to bring new profit opportunities to investors.

Of course, instead of taking everything at face value, I ran GE through our trading algorithms to see if our system says now is the time to make a move.

The company does appear in the portfolio holdings of four high-profile billionaire investors we track in the Billionaires Club, but our system says now is not the time to buy.

GE entered the Red Zone on April 29, and it’s considered high-risk, with a Volatility Quotient (VQ) of 34.57%.

So, the snapshot of the situation is that there is value that can be unlocked from this spinoff, but now is not the time to make a move.

And when an entry signal for GE is triggered in our system, you’ll be prepared with the insights to make an informed investing decision.

In the meantime, don’t forget about the Kellogg spinoff mentioned earlier. Kellogg is currently in our Green Zone, and all the details about its spinoff to unlock shareholder value can be found here.