Source: InnovativeGenomics.org
The potential for how this can help people throughout the world can’t be understated:

But all of this won’t happen overnight; CRISPR-based treatments are still a few years away from being broadly available.


In a Sept. 12 story in The Atlantic, Jennifer Doudna, the Noble Prize-winning co-inventor of CRISPR gene-editing technology, said much more work needs to be done to get the technology to a point where it can be widely used.


“I think back to the advent of the cellphone—another groundbreaking technology in our shared memory. For those of us lucky enough to have experienced it, the untethering of communication from a landline was a seminal moment. But who could have predicted that this once niche and luxury technology would become so ubiquitous as to outnumber the human population, creating new economies and changing the way we live?

“CRISPR may well be on a similar precipice. But for this technology to be widely adopted, it needs a push, just like mobile phones did. Fueling the proliferation of those devices was a host of other technologies and infrastructure systems—voicemail, cell towers, and processing power far exceeding the system that guided the Apollo to the moon. Ensuring that CRISPR reaches its full potential for clinical applications and beyond will require an even higher level of intentional building with diverse and dedicated collaborators.”
Biotech companies are risky investments, as it can take 10 to 15 years and millions of dollars to get a new therapy from pre-clinical research to approval, and there is no guarantee that a new therapy will ever be approved.

You need to know your risk tolerance, financial situation, and long-term goals before considering spending a single dollar on a biotech investment.

However, if you expected there was a “but” about to arrive… you’re right.

While you always want to account for what’s currently happening in the market and have a plan of attack to make money in the here and now, it also pays to be informed, prepared, and ready to pounce on upcoming opportunities.

Like the folks who invested in an unassuming online bookseller run by a 33-year-old CEO on May 15, 1997.

Amazon.com Inc. (AMZN) started out selling just one type of product, but in 2019, it surpassed Walmart as the world’s largest retailer.

It lit the fuse for the e-commerce boom and established the now ubiquitous expectation of two-day shipping. As of 2019, 44% of people go directly to Amazon to start searching for products, bypassing search engines. 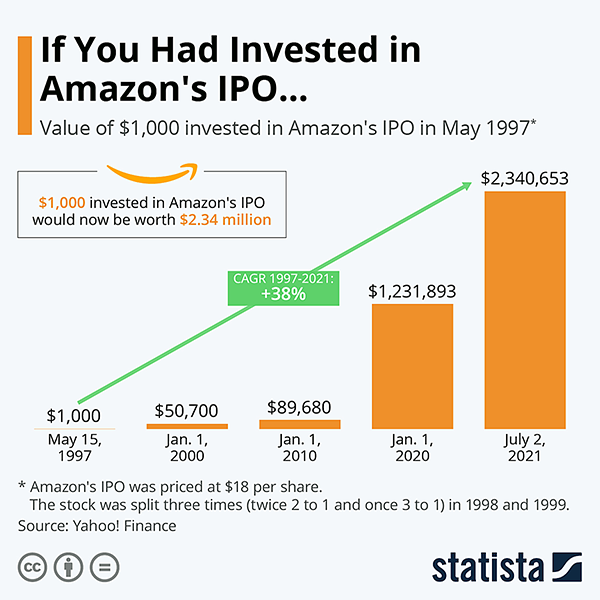 Imagine how much money could be made by investing in companies that could provide lifelong cures to genetic conditions.

With the company my team is about to present to you, you might not have to imagine.

Beam has a portfolio of gene-editing technologies that include base editing, prime editing, nuclease editing, and RNA editing.

One area of Beam’s business that’s worth focusing on is base editing.

Beam believes that its work in base editing has three distinct advantages over existing gene editing approaches: 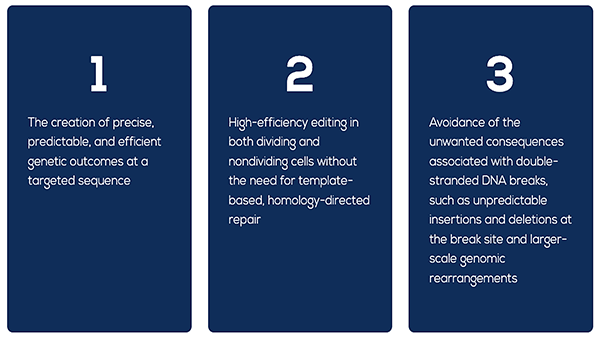 Source: BeamTX.com
And that base editing has attracted the attention of a $261 billion pharmaceutical giant.

Pfizer Inc. (PFE) signed a four-year deal with Beam for a research collaboration in base editing programs for rare genetic diseases of the liver, muscle, and central nervous system.

Pfizer said in a January press release that it would make a $300 million payment to Beam as a part of the deal. Beam is also eligible to receive another $1.05 billion in milestone payments as well as royalties on global net sales.


Beam also has a partnership with the recently public Prime Medicine Inc. (PRME), which will allow it to use Prime’s technology in certain areas, such as sickle cell disease.

Below is the progress on all of Beam’s programs, with BEAM-101 being the nearest to clinical trials: 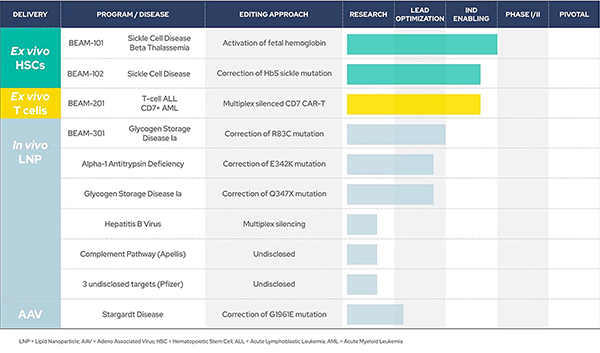 Source: BeamTX.com
Again, to be clear, investing in biotech companies can be risky, especially with BEAM using a revolutionary approach in medicine.

There can be pitfalls and hiccups as it tries to bring gene editing treatments to the world. Our Volatility Quotient (VQ) lists BEAM’s risk as sky-high at 74.22%.

You have to assess your risk tolerance and financial situation to decide whether BEAM deserves a spot in your portfolio, especially considering that the stock price is down 45% in 2022.

Having said that, if Amazon could profoundly impact the world and create massive wealth for shareholders simply through online shopping, just think of what Beam could do with its innovative therapies. The potential alone gives you a compelling reason to add BEAM to your watchlist.

It’s in our Green Zone, with an RSI (relative strength index) as of this writing of 42.33. RSI operates on a scale of one to 100, where anything below 30 is considered oversold.