Happy Friday, and welcome to the newest issue of TradeSmith Snippets.

We have another action-packed issue today, where we’ll be covering:

Bob Iger, who served as Disney’s CEO from 2005 to 2020 and then as Executive Chairman until his retirement in 2021, has returned to Disney as the CEO, replacing Bob Chapek. 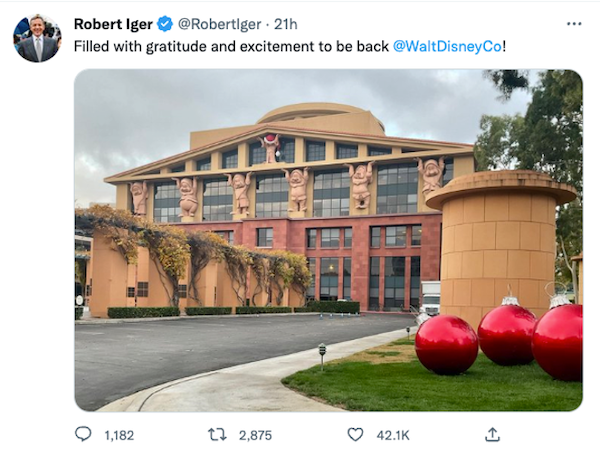 Iger told employees during a town hall meeting that:

From theme park guests being disappointed to the recent box office flop of Disney’s animated film “Strange World,” which cost $180 million to make and only brought in $24 million over a five-day period, many have questioned if Disney has lost its way.

Iger is being brought back to see if he can reignite the “magic.”

Looking to what’s next, Disney’s new CEO wants the company to focus on creativity and on making its streaming business profitable instead of focusing on just adding subscribers.

“It’s not about how much we create; it’s about how great the things are that we do create,” Iger said.

What this means is that if Disney creates better films, it will naturally draw in people to go to the theaters and subscribe to — and stay subscribed to — its streaming service.

Iger has a successful track record at the House of Mouse, acquiring the content libraries of Marvel, Pixar, and LucasFilm, which gave Disney “Avengers: Endgame,” “Toy Story,” and “Return of the Jedi.”

But with the stock price down nearly 40% since the start of the year, if Iger can perform a turnaround, it won’t happen overnight.

And TradeSmith’s proprietary tools are saying that this is a stock more suited to be on a watchlist until it can trigger an Entry Signal.

BlockFi made loans to customers using crypto assets as collateral, but with falling crypto prices in the summer, it had to turn to FTX CEO Sam Bankman-Fried for a $400 million lifeline.

The New Jersey-based cryptocurrency lender has roughly $257 million in cash on hand.

This news has piled onto a rough year for crypto investors, with the price of Bitcoin (BTC) down 64% as of this writing.

While many like to write an obituary for crypto after events like this, Senior Crypto Analyst Joe Shew wants you to keep something in mind: Since 2010, news stories have declared that Bitcoin is dead 467 times, according to 99Bitcoins.com. 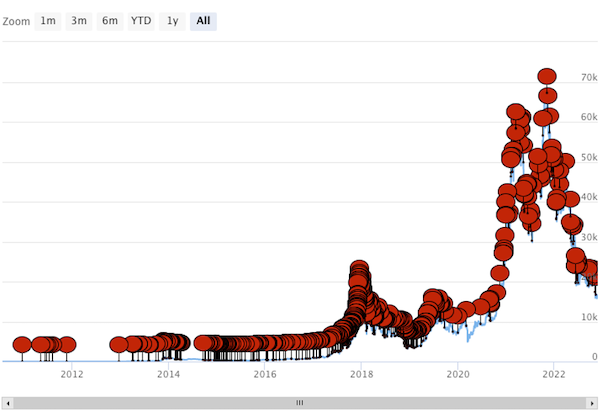 Bitcoin was declared dead at twenty-three cents in 2010.

From all of that, one of Joe’s most important insights is to watch what people are doing in the crypto space, not what they are saying.

Tencent will provide Nio with its cloud computing infrastructure for data storage, which will allow Nio to train cars for autonomous driving.

The companies will also work together on creating high-precision mapping systems for drivers.

This partnership can help Nio gain a competitive edge over its rivals.

For Tencent, which is primarily in the video game business and has previously invested in Nio, providing this technology infrastructure helps lessen its dependence on video game revenue.

Having said that, our Health Indicator says TCEHY and NIO are not stocks to buy.

Fortunately, there are companies worth owning that are fueling the increase in car purchases in the electric vehicle and autonomous vehicle markets.

In this free report, we’ll share one company that is a chip supplier fueling autonomous vehicle technology, and another company that makes sure those electric vehicles stay charged.

One company is in our Green Zone, and although the other recently entered our Yellow Zone, the Relative Strength Index indicator suggests that the stock could be oversold and that now could be a good time to consider an investment.