With Thanksgiving on Thursday, I know that the super-organized travelers already have their outfits and essentials neatly packed and ready to go, while the procrastinators will be jamming things into their suitcases minutes before they need to leave.

I’m not here to judge your suitcase packing timeliness.

But what I am thinking about is the travel aspect of many people’s plans over the next few days.

In 2019 and 2021, the Sunday after Thanksgiving was the busiest travel day of the year for airlines, according to TSA (Transportation Security Administration) data. And whether people are traveling to a relative’s home, a friend’s house, or a favorite vacation spot with their family, what that TSA data is telling me is that people are still craving experiences.

To be with people.

To reminisce over old times and to make new memories.

In a recent Airbnb Inc. (ABNB) investors call, CEO Brian Chesky captured the essence of everything I just mentioned when sharing why his company recently had a strong quarter that exceeded expectations:


“Because many people are now working from home, the mall is now Amazon, the movie theater is now Netflix, people still want to get out of the house. They still want to have meaningful experiences.”
In this edition of Buy This, Not That, we’re going to look at snapshots of a company that facilitates experiences that is considered a “buy” and one that you should avoid.

Ryman Hospitality Properties Inc. (RHP) is a resort, hotel, and media company that owns the Grand Ole Opry brand and five of the top 10 largest non-gaming convention center hotels, which operate under the Gaylord Hotels brand.

In terms of having an experience, you don’t have to look much further than the Grand Ole Opry.

It’s been called the “home of American music” and “country’s most famous stage,” and hundreds of thousands of people make a trip to see a live show each year. 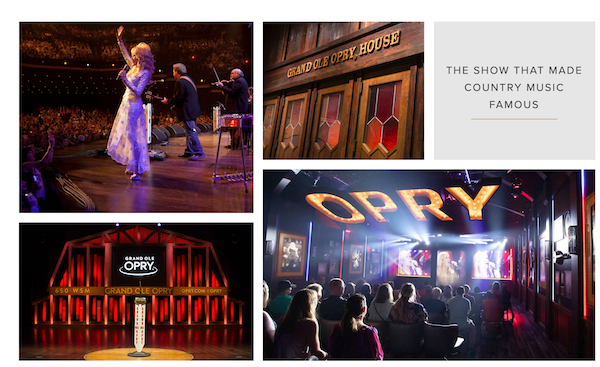 Source: RymanHP.com
For fans of Carrie Underwood, Darius Rucker, and Keith Urban, watching these artists live with all of the history and awe that the Grand Ole Opry House carries is an experience they are never going to forget… and they may even look to make it part of a new yearly vacation tradition.

It has an 85-acre resort located in Aurora, Colorado, that houses a $25 million indoor and outdoor water park, eight restaurants, and a luxury spa.

Source: RymanHP.com
If you’re a fan of warmer weather, you can head to Ryman’s Gaylord Palms Resort and Convention Center, which is styled as a turn-of-the-century Florida mansion.

It has 13 food and beverage outlets and a luxury spa, and it’s just five minutes from the front gate of Walt Disney World.

As an investment opportunity, the company says it has “positive momentum” and restarted its dividend payouts in October for the first time since they were suspended in April 2020.

RHP is considered to be a high-risk investment with a Volatility Quotient (VQ) of 42.47%, but it’s also in our Green Zone, and the fact that Ryman Hospitality Properties was able to restart its dividend payout is a positive sign that the company feels it will be generating enough revenue in the immediate term to continue that payout.

Under the Choice Hotels umbrella are companies with mainstream name recognition, such as Quality Inn, Sleep Inn, and Econo Lodge. 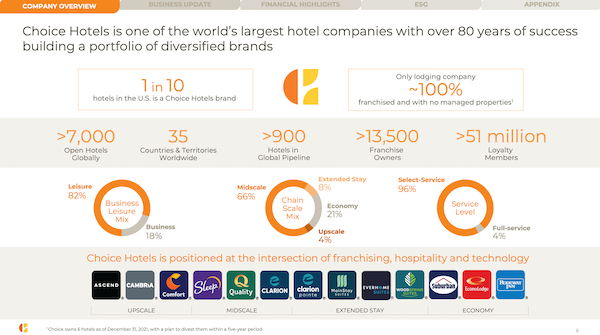 One potential advantage of the company’s business model is that it limits overhead costs by selling its name, logo, and systems to a franchisee who pays for the costs of maintaining and operating the property on their own.

And while it does offer more upscale accommodations, its lodgings generally give off the sense of being places travelers stay for convenience and cost-efficiency rather than for a superlative experience.

That’s not a bad thing, and Choice Hotels is benefiting from increased traveling.

But besides the fact that it’s in our Red Zone, which indicates that the stock is unhealthy, Choice Hotels just feels like a less exciting story in terms of aiding travel experiences than Ryman Hospitality.

Ryman’s lodgings are an experience all their own. For instance, if you were staying at the Gaylord Palms Resort and Convention Center, how could you not want to snap a pic of a ship that’s in the atrium of your hotel? 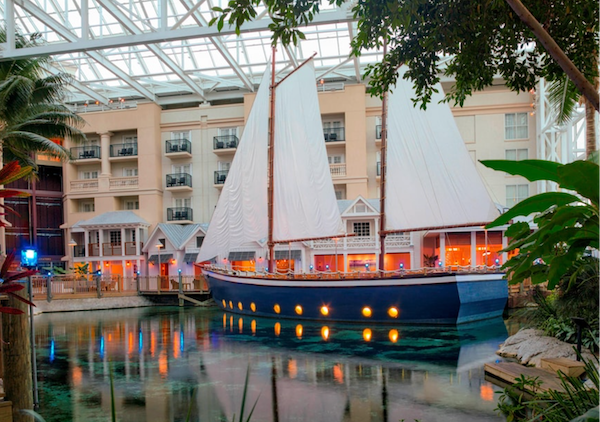 Source: Marriott.com
In comparison, there aren’t many exciting photo ops in the lobby of an Econo Lodge.

Again, Choice Hotels can profit from pent-up travel demand, and with a VQ of 28.43% it is considered less risky of an investment than RHP.

But it’s a stock to avoid since it’s in our Red Zone, and in terms of a company that can aid or even create memorable experiences, Ryman Hospitality wins the battle of Buy This, Not That.

I’ll talk to you soon.

The Bank of Japan Disappoints and the Yen Shakes It Off, Telegraphing Hidden Strength

From Carrier Pigeons to Computers, ‘Big Money’ Always Had the Edge. Until Now.

Your Revenge on the ‘Big Money’ Can Start Today