The market sold off hard earlier this week, and the technical damage was real and substantial. In the eyes of the financial press, the out-of-the-blue cause was the omicron variant.

The narrative goes something like this: Fears of a new coronavirus strain — and the havoc it could wreak if current vaccines prove ineffective — generated a market sell-off that began the day after Thanksgiving and intensified after the first omicron case was confirmed in the United States.

The omicron variant could certainly turn out to be serious. We can see that via the energy complex, where benchmark crude oil prices fell 15%-20% in a matter of days. (Unless you are OPEC+ or Vladimir Putin, crude oil is too large and deep a market to manipulate.)

And yet, when it comes to stock markets — and particularly the U.S. market — the omicron variant is probably a sideshow. There are deeper reasons why the market is in trouble. Relative to those issues, omicron is icing on a bearish cake.

The Fed is a Bigger Danger Than Omicron

There is an old saying on Wall Street: Bull markets do not die of old age; they are killed off by central banks. The saying implies a standard pattern of events that looks like this:

It is hard, if not impossible, to know in advance when sentiment will turn lower. That is because investors on the whole can choose to be early or choose to be late.

This week, at the same time omicron news was hitting the tape, Federal Reserve Chairman Jerome Powell delivered a very clear message in his remarks to the Senate Banking Committee: It is time to go into inflation-fighting mode. That means taking the policy tightening actions that, historically speaking, have tended to kill off past bull markets.

In responding to committee questions, here are some excerpts where Powell made things clear:


“The risk of higher inflation has increased…”

“To get back to the kind of great labor market we had before the pandemic, we’re going to need… price stability… and in a sense, the risk of persistent high inflation is also a major risk to getting back to such a labor market.”

“The economy is very strong and inflationary pressures are high, and it is therefore appropriate in my view to consider wrapping up the taper of our asset purchases… perhaps a few months sooner.”
Powell also said that “it’s probably a good time to retire the word “transitory,” and admitted that, when it comes to inflation driven by supply chain issues, the Fed missed the boat: “What we missed about inflation was we didn’t predict the supply-side problems, and those are highly unusual and very difficult, very nonlinear. And it’s really hard to predict those things.”

Leverage and End-of-Year Selling Are Potential Issues Too

Two additional problems the market faces are retail investor leverage and the potential for end-of-year selling to snowball into a mini-crash or meltdown effect.

“Margin borrowings in October were up 42% from a year earlier to $935.9 billion,” the Wall Street Journal reports, adding that “a measure of cash holdings among individual investors fell to 46% of margin balances.”

If individual investors have just 46 cents for every dollar of margin balance — the most aggressive reading since 1997, according to Jason Goepfert of Sundial Capital Research — that means retail investors are more leveraged now than at any point dating to the early stirrings of the dot-com bubble.

One could further argue that today’s leverage is even more extreme — blowing away all the old metrics — when the impact of hyper-aggressive options trading is taken into account.

For instance, here is the Financial Times describing options trading in Tesla, the king of retail stocks:

However, there have been days recently where Tesla’s option trading activity has been five-to-six times the rest of the S&P 500 options ecosystem combined. “The size of the Tesla options market is absolutely enormous,” he says.
Let us just restate that amazing data point. Retail investors have been so aggressively bullish — and so willing to use high-octane options — that options trading in their favorite stock alone (Tesla) has routinely exceeded the combined option activity of the rest of the S&P 500 by as much as 500%.

Extreme leverage — via margin borrowing and the use of options on top — is a kind of rocket fuel. With enough rocket fuel at hand, asset prices can seemingly levitate in the sky for a long period of time.

But what happens when the rocket fuel runs out? We may be on the verge of finding out, as evidenced by the ARK Innovation ETF (ARKK), a retail investor darling that is also a kind of actively managed grab bag of wildly overpriced names. 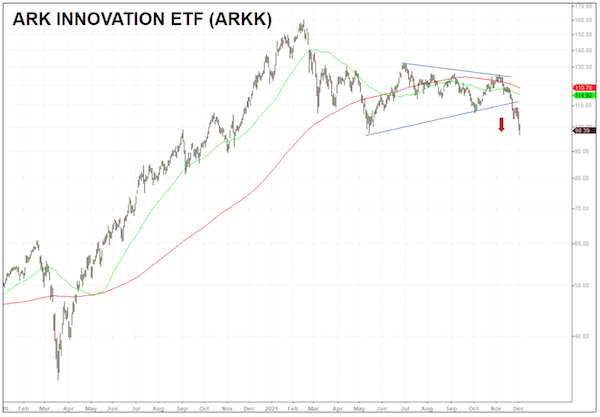 After mostly treading water below its 200-day moving average (the red line on the chart) for the second half of 2021, ARKK went into free fall this week. Nor was it the only retail-themed name to plummet. Robinhood Markets Inc. (HOOD) is taking a journey to the center of the earth.

As the retail crowd starts abandoning favorites — AMC Entertainment (AMC) is another one that entered free fall this week — we can’t help but wonder what will happen if Tesla, the grandest meme stock of them all, gives up the ghost.

Then, too, it matters that the S&P 500 was up roughly 28% on the year headed into Thanksgiving day.

It matters because money managers sitting on substantial profits for the first 11 months of 2021 will be sorely tempted to “book the year,” meaning to take profits off the table and reduce risk to the point of cruise control between now and year-end.

Doing that would require further selling. And if enough of that selling hits the tape simultaneously, the potential for a further brutal sell-off could become a self-reinforcing feedback loop as downside price movement begets more downside.

If we had to pick a single stock index to monitor for further warning signs at this point, it would probably be the Russell 2000 Index, a bellwether measure for small-cap stocks.

Bullish investors rejoiced in the early weeks of November, when the Russell 2000 registered a powerful upside breakout after treading water (trading sideways) for most of the year. But the breakout turned out to be a nasty head fake, with the Russell not only reversing lower but slicing through the 200-day moving average support (the red line on the chart).

If there is any hope of the already extended stock market bull run continuing into 2022 — in the face of an inflation-fighting Fed, we might add — the Russell 2000 will have to regain its footing. If, instead, the Russell confirms a new bearish downtrend after a year of sideways movement, the bulls will be finished.