As a friendly reminder, the stock market is closed tomorrow in celebration of Thanksgiving.

I know you’re probably busy doing some food prep, getting ready to run out to the store to pick up that dried thyme or smoked paprika that you swore was in the back of your kitchen cupboard but can’t seem to find, or packing an overnight bag to go visit your family.

Before all that happens, I want to share how grateful I am to have you here with us.

There’s no shortage of choices in where you can turn for financial information, and we take great seriousness in providing you with TradeSmith Daily issues that:

I hope you have a safe and wonderful Thanksgiving.

And as you’re digesting turkey on Thursday — and indulging in leftovers throughout the weekend — I also wanted to provide a few forward-looking storylines for 2023 that our team has put together for you to “digest” as well.

Or eat only 5% of your dinner…

But in July, when electric vehicles (EVs) accounted for 5% of new car sales in the United States, that was a massively important percentage for investors — a Bloomberg report said it’s the signal that we’re now headed toward mass adoption of EVs.

And if the U.S. follows the trajectory set by 18 other countries, 25% of all new car sales here could be electric by 2025.

This faster rate of adoption will be thanks to more public charging stations, less expensive cars, and buyers being more educated, which is all accelerating much faster than most people anticipated.

And in this issue of TradeSmith Daily, we’re looking beyond investing in individual electric vehicle makers and zeroing in on the companies that will power the widespread use of EVs across the country.

Source: InnovativeGenomics.org
The potential for how this can help people throughout the world can’t be understated:

But all of this won’t happen overnight; CRISPR-based treatments are still a few years away from being broadly available.

In a Sept. 12 story in The Atlantic, Jennifer Doudna, the Noble Prize-winning co-inventor of CRISPR gene-editing technology, said much more work needs to be done to get the technology to a point where it can be widely used.


“I think back to the advent of the cellphone—another groundbreaking technology in our shared memory. For those of us lucky enough to have experienced it, the untethering of communication from a landline was a seminal moment. But who could have predicted that this once niche and luxury technology would become so ubiquitous as to outnumber the human population, creating new economies and changing the way we live?

“CRISPR may well be on a similar precipice. But for this technology to be widely adopted, it needs a push, just like mobile phones did. Fueling the proliferation of those devices was a host of other technologies and infrastructure systems—voicemail, cell towers, and processing power far exceeding the system that guided the Apollo to the moon. Ensuring that CRISPR reaches its full potential for clinical applications and beyond will require an even higher level of intentional building with diverse and dedicated collaborators.”
Biotech companies are risky investments, as it can take 10 to 15 years and millions of dollars to get a new therapy from pre-clinical research to approval. And there is no guarantee that a new therapy will ever be approved.

You need to know your risk tolerance, financial situation, and long-term goals before considering spending a single dollar on a biotech investment.

However, if you expected there was a “but” about to arrive… you’re right.

While you always want to account for what’s currently happening in the market and have a plan of attack to make money in the here and now, it also pays to be informed, prepared, and ready to pounce on upcoming opportunities. Like the folks who invested in an unassuming online bookseller run by a 33-year-old CEO on May 15, 1997.

Amazon.com Inc. (AMZN) started out selling just one type of product, but in 2019, it surpassed Walmart Inc. (WMT) as the world’s largest retailer.

It lit the fuse for the e-commerce boom and established the now ubiquitous expectation of two-day shipping. As of 2019, 44% of people go directly to Amazon to start searching for products, bypassing search engines completely. 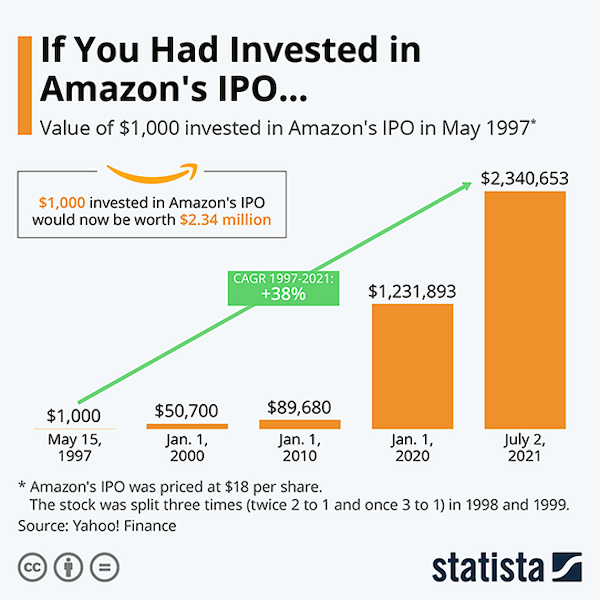 Imagine how much money could be made by investing in companies that could provide lifelong cures for genetic conditions.

With the company my team is about to present to you, you might not have to imagine.

At the start of “The Big Short,” the narrator shares that a few individuals knew we were headed toward a real estate collapse in the mid-2000s.

He says that while the world was having a big party, a few “outsiders and weirdos” saw what was going to happen because they did something “the rest of the suckers never thought to do.”

Although that quote was in reference to the real estate bubble, it reminds me of company spinoffs and how investors aren’t taught how to “look” at them.

A spinoff is when a company creates a new independent company with the idea that certain segments of a business can perform better — operationally and financially — when they are not tethered together under one umbrella.

For instance, Abbott Laboratories (ABT) spun off AbbVie Inc. (ABBV) back in 2013 so that Abbott could focus more on selling medical devices, diagnostics, branded generic pharmaceuticals, and nutritional products.

AbbVie was to focus on a portfolio of drugs, which included the blockbuster medicine Humira.

In the chart below, you can see that spinoff has paid off for shareholders of both companies over the past five years, with ABT and ABBV each outperforming the S&P 500. 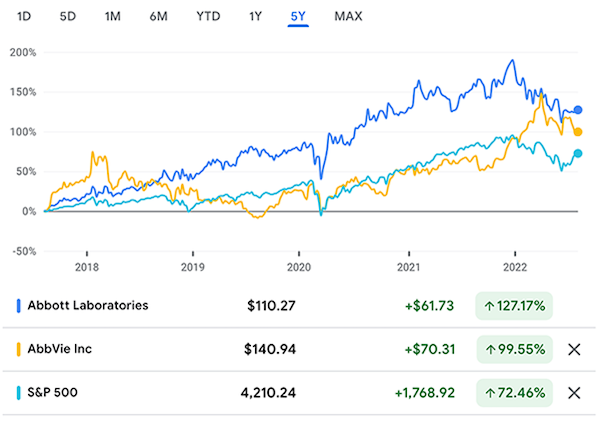 Source: Google Finance
And for a more general overview, Deloitte and Edge Consulting Group found that between 2000 and 2014, spinoff stocks generated a 22% return in the first 12 months of trading. That’s even better than the 14% return of the parent company that performed the spinoff.

Not all spinoffs will work out, but the data above shows that any time one happens, it’s a profit opportunity.

Companies doing the spinoffs don’t offer a lot of communication behind what’s happening, index funds often can’t hold the new company’s stock and sell it if they receive it as a part of the spinoff, and some analysts even stop following the stock because they don’t know how to value it anymore.

This all boils down to the fact that investors simply aren’t provided enough guidance on how to look at these opportunities.

That’s why I want to show you how to evaluate two spinoff opportunities that are set to take place in 2023:

That’s it for now.