Last week, the Federal Reserve told us what we all expected: Rate hikes are coming.

That exacerbated a sell-off in equity and debt markets, with technology stocks getting hit the worst.

But there are a few industries I’m a bit concerned about, including the automotive and appliance industries.

You see, higher rates mean consumers pay more interest when they take on debt from purchases. Typically, this happens with big-ticket items.

However, the picture is a bit more nuanced than just “sell auto and appliance stocks,” because consumer debt levels are at some of their lowest levels in decades.

I want to take you through my analysis and highlight the key data points that will tell me when and where to expect a potential sell-off.

Let’s imagine you want to buy a new car.

The dealer gives you two options to purchase a $30,000 vehicle.

With a typical amortization schedule, you’d pay $3,793.60 in interest on the second option. So the two are pretty close.

All this seems pretty straightforward, and it makes sense why big-ticket items like autos and appliances would see demand dwindle with higher rates.

But there’s another piece of information you need.

Despite record inflation, American consumers have more wealth and less debt than at any time in the last decade.

The following graph shows us the assets, liabilities, and net worth for the American household as a percentage of disposable income over the last 15 years. 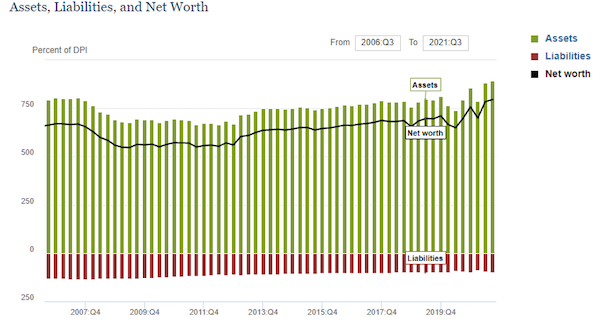 Source: Federal Reserve
Our disposable income is the money we have left over after paying all our essential bills.

Creating a ratio between disposable income and our assets, liabilities, and net worth allows us to see our personal balance sheets relative to the amount of excess money we have.

How did this happen when the economy was at a standstill for so long?

A big chunk of it came from the federal government’s payments sent to households and other types of assistance.

In fact, researchers at the University of Michigan found that financial instability and food shortages actually declined as a direct impact of those payments.

On top of that, The Conference Board found that wages have increased at some of their fastest levels in decades, with more pay raises planned for 2022.

However, inflation has outpaced wage gains, which will start to eat away at the household wealth generated over the last year.

Why do I bother explaining all this?

Go back to the two outcomes of higher interest rates.

With so much wealth, a significant chunk of which is in cash, Americans can forestall the impact of interest rates for a while, possibly even months, creating a lag before demand for capital goods begins to decline.

Where We Spend Our Money

I pick on autos in particular because the two largest purchases for most households are homes themselves and cars.

Homes will see demand decline. However, there’s such a shortage of inventory with no substitution, I don’t see interest rates having much of an impact in 2022.

On the other hand, you can fix up an old car or extend the life of your current vehicle, take public transportation, carpool, or like many of us these days, work from home.

That’s why I expect durable goods to be the first casualties of rate hikes from the consumer side. This includes furniture, washing machines, televisions, and the like.

Manufacturers that rely heavily on semiconductors are particularly susceptible because they already struggle to meet demand as is.

Should interest rates curtail demand below the manufacturers’ supply capacity, those same semiconductors are likely to find their way into other industries.

The Fed comes along and cranks up interest rates, pushing demand below supply.

So the carmaker can either make fewer cars or reduce its price.

If it reduces price but still spends the same amount to make each car, its margins decline. So the automaker decides to pay less for its materials, including semiconductors. Given the high demand and massive shortage of semiconductors, the chip manufacturers will simply sell their wares to another industry willing to pay more.

This same logic applies to any input costs where demand far outstrips supply, including aluminum, steel, and other commodities.


What to Watch for

While we’ve seen the sell-off hit technology hard, it hasn’t filtered into consumer cyclical stocks quite yet.

I believe those will start to lose their footing several months after the Fed raises rates, if they haven’t already.

To give you an idea of where things stand, here’s a quick snapshot of some major durable goods companies and the health of their stock charts:

I’m not saying I expect these stocks to fall out of bed tomorrow.

However, I believe that some investors underestimate the risk in these names relative to other consumer products companies.

Now, there are some companies that make products we can’t live without, like smartphones.

Which consumer cyclical companies or what themes do you expect to outperform the broader market?

Let me know your thoughts.